Hello! My name is Joel Nyström, project manager at Ludosity and you will also hear from Fair Play Labs Game Designer Matías R. Singer in this blog, but you’re here to learn about Ren & Stimpy and to find out how they fit into Nickelodeon All-Star Brawl, our upcoming platform fighter that is filled with both current and classic Nickelodeon characters.

Ren & Stimpy are definitely on the classic side of the character spectrum. I’m a 90’s kid and I absolutely loved The Ren & Stimpy Show growing up. They were so refreshingly dirty and disturbed compared to everything else at the time. I loved and continue to love them to bits. It was one of the few Nickelodeon shows that aired in Sweden and I often watched it after school. Back then, if you missed it on TV you missed it forever, so I always made sure to catch it and I wasn’t alone. I think everyone involved with the game wanted Ren & Stimpy so their inclusion was a no-brainer.

As anyone who has watched the show knows, they are separate characters with distinct personalities, but they are also inseparable which is why they play as a single, joint character in Nickelodeon All-Star Brawl. We really wanted them to be a duo. It allows for some very special moves and playstyles, so we thought it’d be interesting to explore.

Matías R Singer, Game Designer at Fair Play Labs, who is co-developing the game with us, was heavily involved in their design and says, “They have a knack for using each other as weapons, which really helps the slapstick comedy of the show come to life.”

Ren rides on Stimpy’s shoulders which makes them slower than other characters, but they often attack in multiple directions together. Ren deals lower initial damage and Stimpy deals higher, but delayed damage. Here’s an early sketch of Ren & Stimpy’s Crouch Strong attack as drawn in some of our early conceptualization. 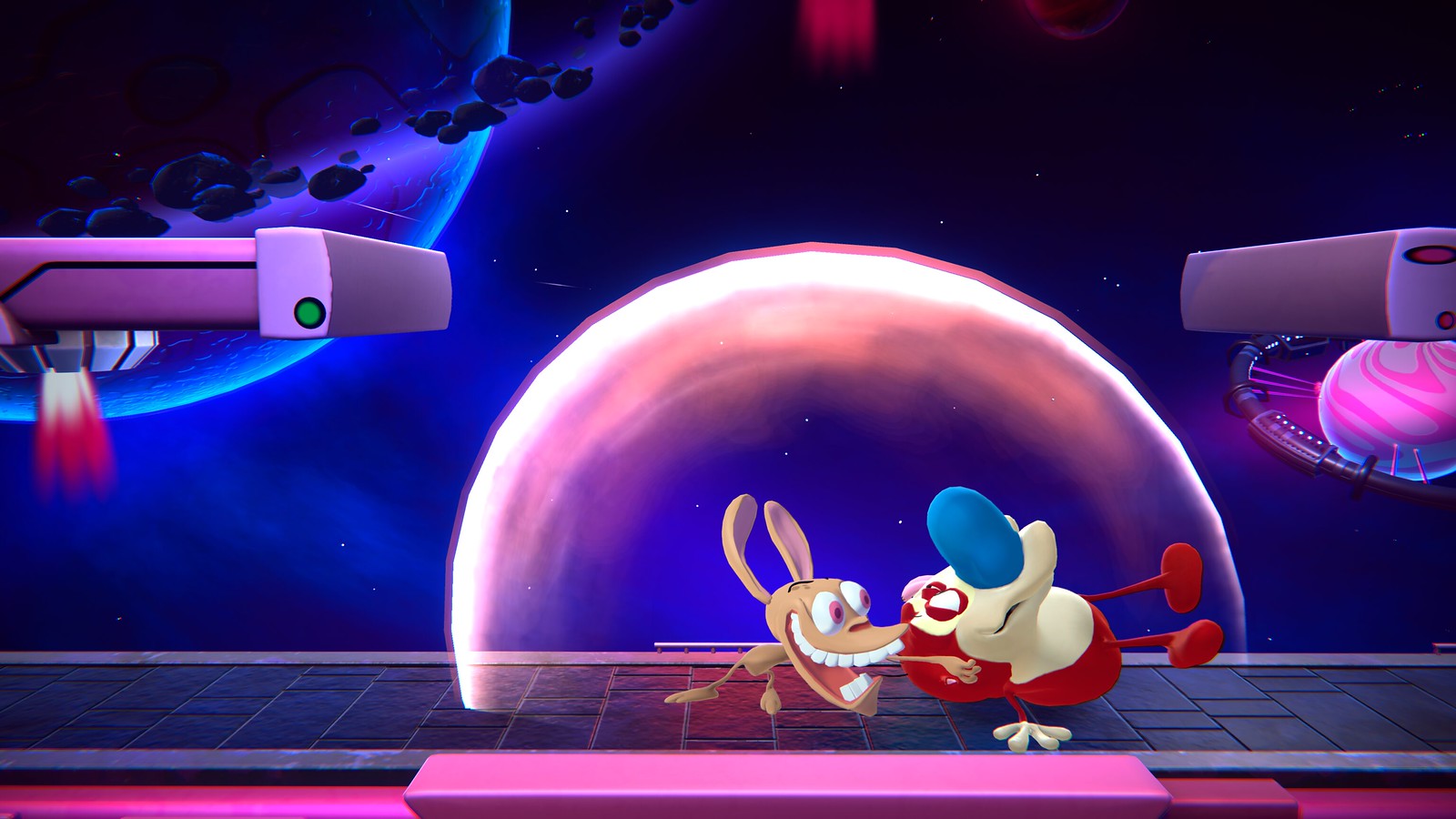 They’re slow and heavy so you want to move in on your opponent, but they also have good range with a bouncing log projectile and a very fast Down Strong that is especially fun to use as a spike for a match ender, since it’ll ring-out you both. It was very important to us and Singer that we get log in the game. “The Log from the Blammo advertisement is so iconic we couldn’t conceive not including it as a Special move. The ‘Happy Happy Joy Joy’ song was likewise used as a reference for the Strong Up Air.”

He may look complicated considering he is two characters being controlled as one, but Singer, along with all the rest of us, wanted him to be welcoming to even novice players. “The wide range of their attacks makes it easier to land hits on opponents without having to reposition, which is very helpful for new players.”

Here is a breakdown of a few more of Ren & Stimpy’s moves from concept to in-game. 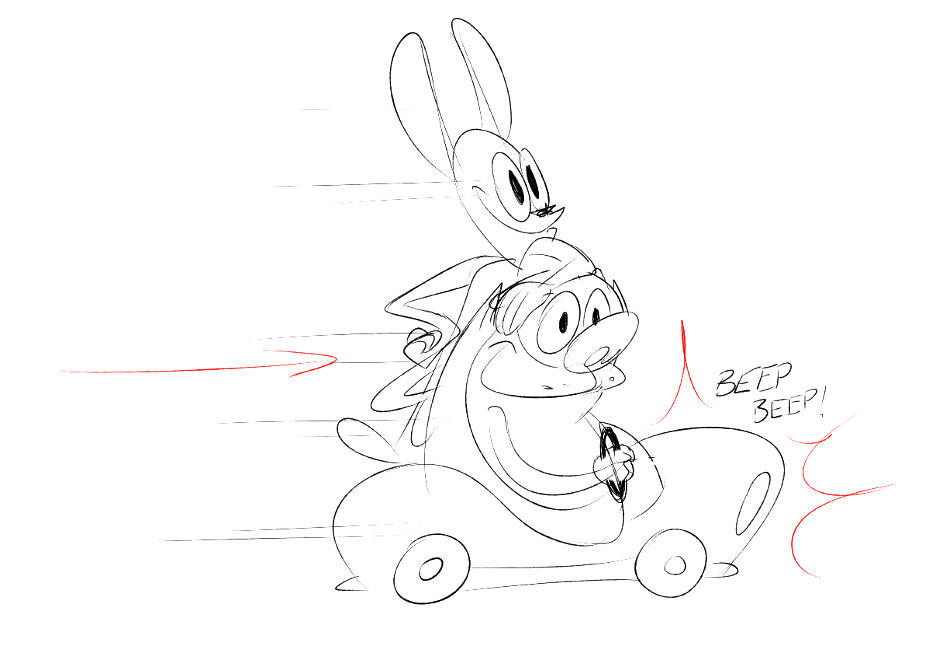 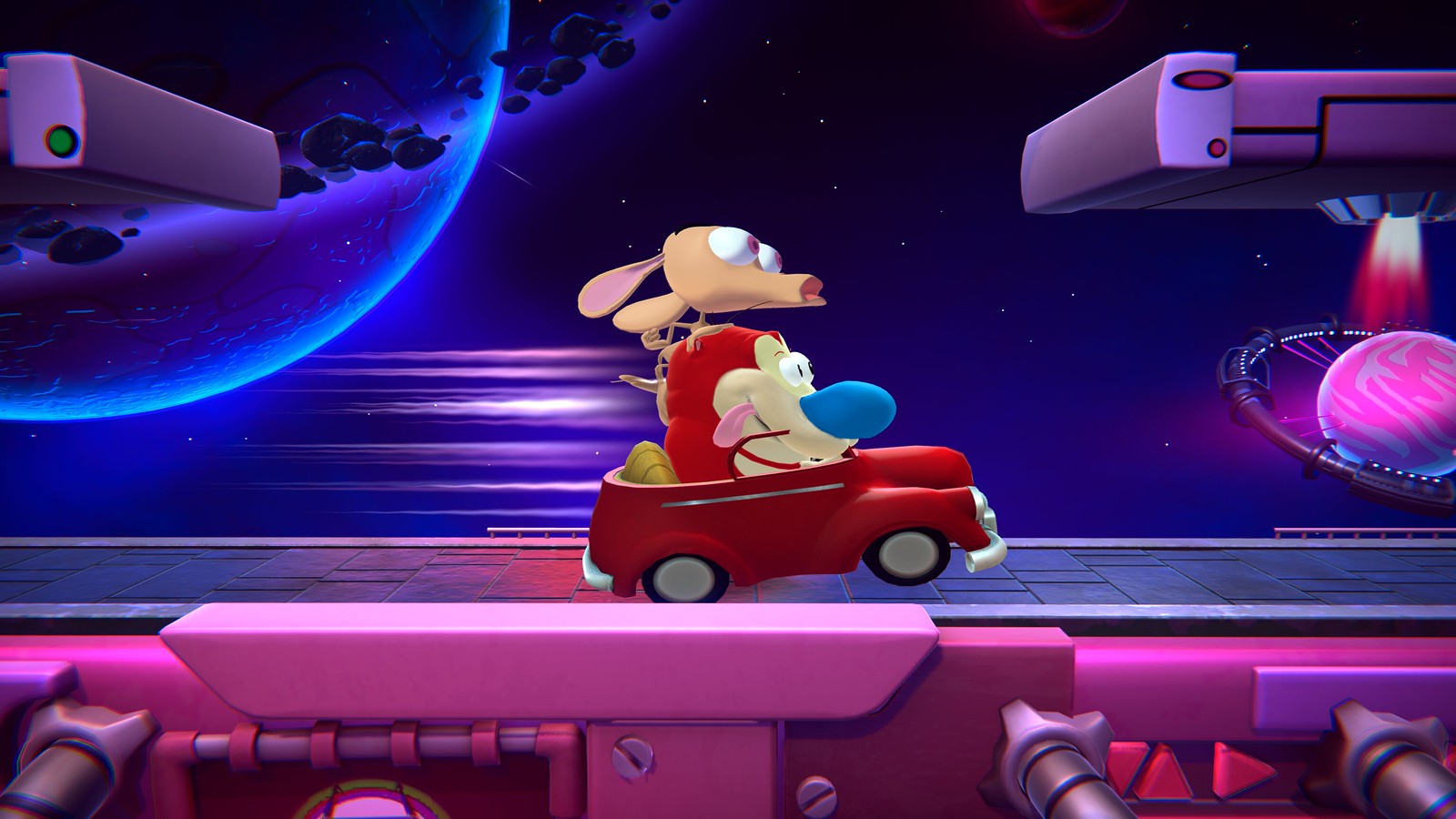 Ren & Stimpy’s Light Neutral is called, “Keep it together!” Here Ren smacks Stimpy once, but continuing to mash the button leads into a loop with Ren shaking Stimpy back and forth. 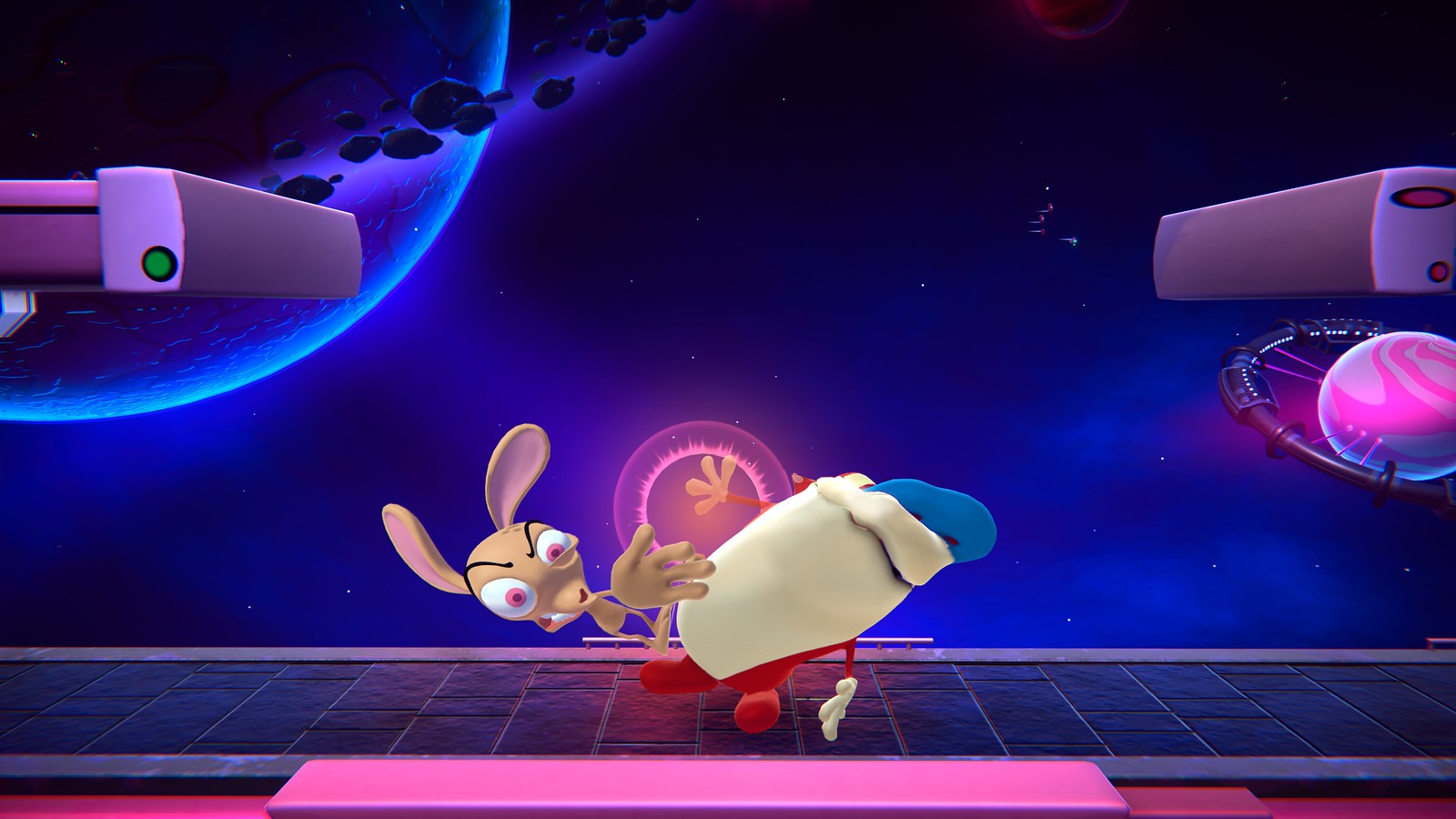 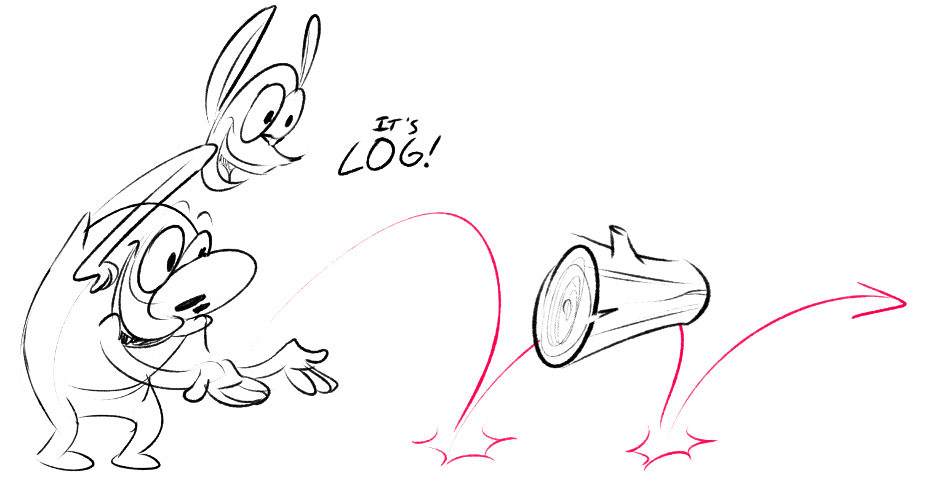 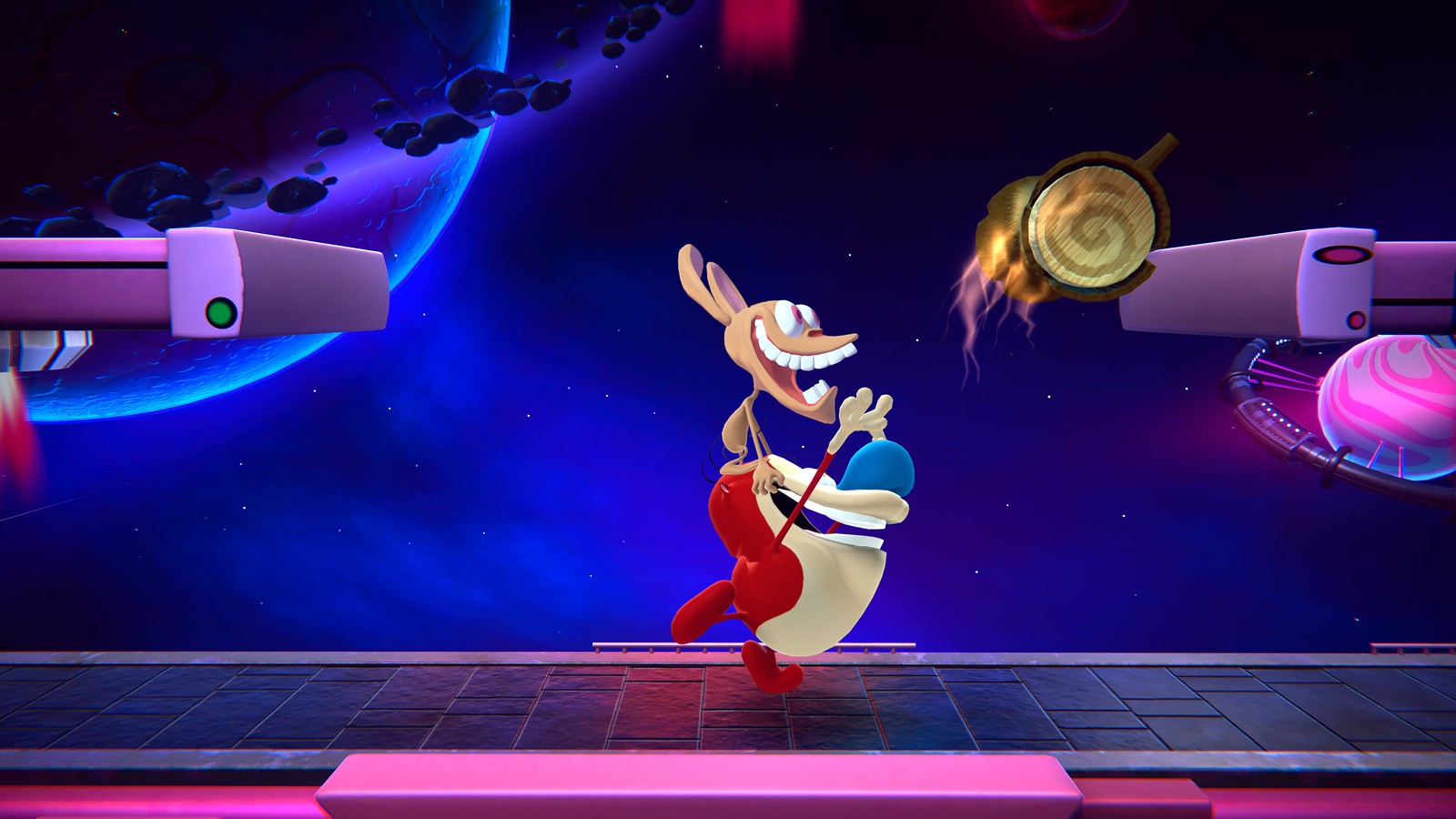 Each of Ren & Stimpy’s moves is inspired by a particular scene of the show, but we’ll leave it up to the players to find all the references. I can’t wait for everyone to get their hands on the game later this year!