As plans for resumption of racing for Monster Energy AMA Supercross, an FIM World Championship, continue to be worked through, the stars of the sport are taking to a virtual track for this inaugural Monster Energy Supercross E SX event.

Set in Angel Stadium in Anaheim, CA the television special features 90 minutes of great racing action played on Xbox One X, showcasing seven Supercross athletes competing against one another in the 250SX Class and another seven athletes competing in the 450SX Class. Using the track layout from the opening round of the 2019 Supercross season, the telecast also includes the true-to-live NBC Sports broadcasting team of Leigh Diffey, Ricky Carmichael, and Daniel Blair calling the action in both the 15-minute plus two lap 250SX Main Event and 20-minute plus two lap 450SX Main Event. 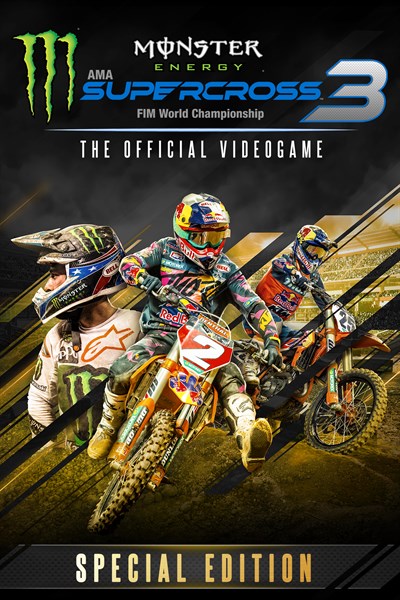 ☆☆☆☆☆ 118
★★★★★
$79.99 $47.99
Get it now
Buy the Special Edition of the official Monster Energy AMA Supercross Championship game and get: the full game and the Season Pass with 9 DLCs. Double your credits at the end of every online and offline race, race with the legends and in a legendary track that made the history of Supercross. Have fun changing your bike's livery and your rider's tracksuit with incredible customization items, enjoy the spectacle of the Monster Energy Cup with its set of special rules, customize your game menu showing your loyalty with your favorite bike manufacturer and customize your track editor with new items!