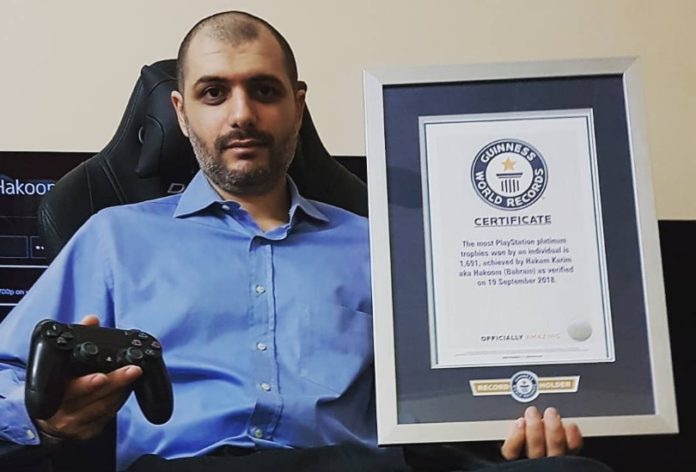 Guinness World Records has named a PlayStation trophy hunter the record holder for the most Platinum trophies acquired by an individual after he accumulated 1,691 Platinums.

The bahraini A-Hakam breaks world records for the playstation and enters Guinness for having the most plats and trophies in the world after 10 years!
.@playstation @GWR#playstation #ps4pro #playstation4 #sony #bahrain #gaming #ps4 #gamer #hakoom pic.twitter.com/7vykVOL7TE

From the time that the Guinness World Record certificate was issued to now, Hakoom has actually acquired even more Platinum trophies than what the certificate originally said. According to his PSN Trophy Leaders account, a link that’s proudly listed in his Twitter bio and leads to the trophy-tracking site that shows who’s on top in the trophy race, he has 1,717 Platinum trophies. Given the difficulty of acquiring Platinum trophies in games, that number is dwarfed by the amount of Bronze, Silver, and Gold trophies that he’s earned. His account has a total of 70,120 trophies overall.

But while he’s currently the holder of the record with the staggering number of Platinum trophies, he’s not actually that far ahead of the second-place trophy hunter. Roughdawg4 has 1,711 Platinum trophies, just six behind Hakoom, but Roughdawg4 has nearly 1,000 fewer trophies than Hakoom. It’s the Platinums that matter in this race though, and there’s only a small gap separating the two.

That lofty number of Platinums does raise the question of how Hakoom accumulated so many, a question that he himself addressed in a thread on Reddit that discussed his achievement. While those in trophy-hunting circles will know his name and method, others who weren’t as familiar with him asked questions about how he got so many trophies. According to a video that he shared, Hakoom runs multiple gaming setups at once across different PlayStation systems to earn Platinum trophies quicker. When asked how many hours it took to earn all his trophies, he said that it was the result of 10 years of gaming with 10-20 hours put into the project each day. Commenters within the Reddit post also brought attention to some trophy timestamps that they thought were suspiciously close to each other, but Hakoom denied any accusations of ill-gotten trophies and said that he’s provided proof in the past.

Hakoom holds the record for most Platinum PlayStation trophies for now, though it’s unknown how often such a record will be updated or if he’ll hold that title for long.