Operation Spectre Rising focuses on stealth assassinations, clandestine gameplay and game modes, and being the very best trash receptacle you can be (with the return of the classic Prop Hunt game mode) to Call of Duty: Black Ops 4.

Meet the Assassination and Infiltration Specialist

Those of you familiar with Black Ops III know Spectre, a deadly and clandestine free agent who has most certainly made their presence known at the Hydro Dam on the Blackout map. Without confirmed intel on Spectre’s name, birth, or even gender, there is very little known about this liquidator. Although you probably don’t want to be facing the sharp end of Spectre’s Shadow Blade!

Spectre’s Special Issue Weaponry, the Shadow Blade, is perfect for stealth assassinations. Use it to lock onto and thrust into adversaries in a whirl of rapid takedowns all in third-person perspective. Feel free to chain additional sword strikes into a combo of enemy executions! 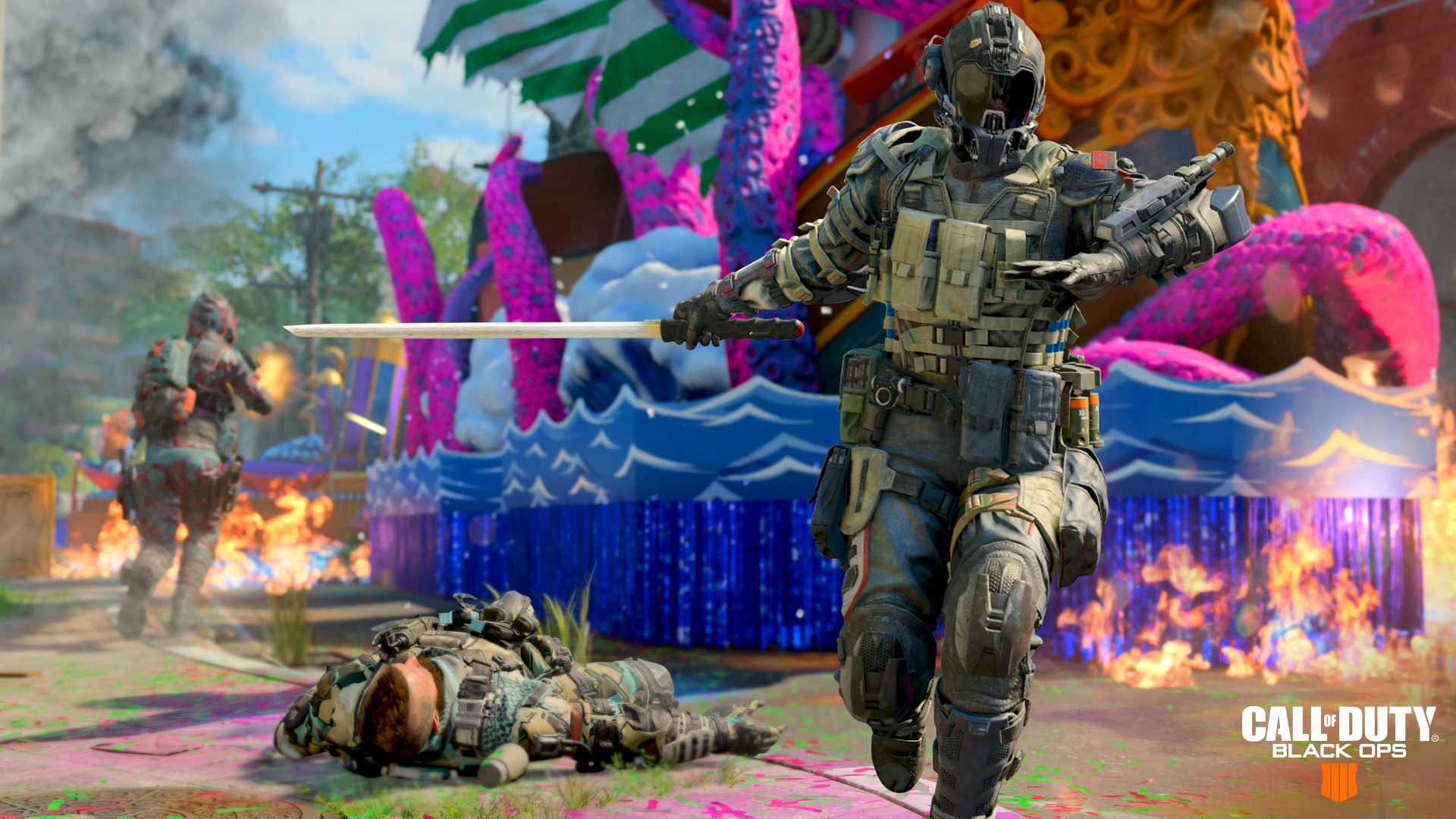 This newly appearing Black Ops 4 Specialist also has exceptional maneuverability as well as prowess with a blade. Forward and sideways rolls, along with a retreating backflip are part of your moves; all designed to flummox your foes. Spectre backs up this nimbleness with a Smoke grenade that provides more than just a thick blanket of obscuring vapor. It temporarily disables enemy aim-assists, and pinpoints adversaries within the smoke so Spectre can drop in and devastate in the confusion!

New Game Mode, Prop Hunt: The fan favorite Multiplayer Mode debuts in Black Ops 4! Take 12 players, pitting 6v6 in a round-based game where Hunters search for props hidden across the map environment! What follows is a hilarious high-stakes game of hide-and-seek. Props try to blend into the map (and can change their form from a trash can to a bike, for example), and they can concuss a Hunter if one gets too close, allowing them to reposition in a different hiding place. However, each Prop “whistles” every 30 seconds to give Hunters a clue to their location. As for the Hunters? Simply find and take down all props. If a single prop survives the round, the Props win. If all Props are taken down, the Hunters win.

Main Blackout Map: The Wetworks update to the main map in Blackout is here courtesy of the recent Dam burst. The map destinations Factory, Rivertown, Cargo Docks, and the farm near Firing Range have felt the brunt of the tsunami, leading to some different downstream environments. This may require new tactical planning when exploring or holding these locales. Now that more of the map is under water, the Tactical Raft can be used in more places if you want to quickly move through flooded areas. 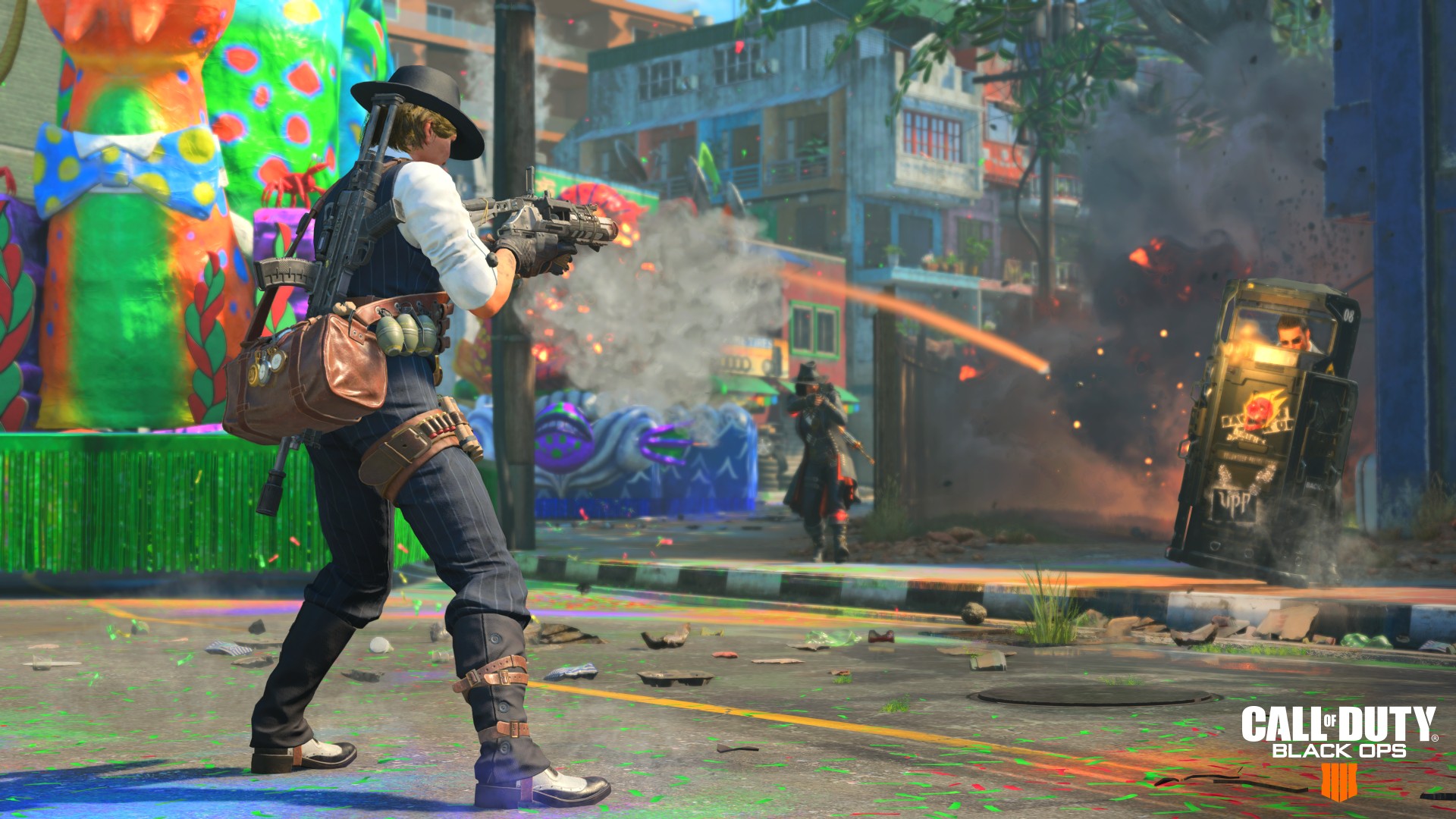 Bounty Hunter (Game Mode): After dropping onto the main Blackout map, the plan is simple; locate one of Spectre’s Shadow Blades marked by a beam of light and transform into the assassin. With the weapon in hand, the camera moves to a third-person perspective, and you begin a hunt to defeat all other enemies. Top players will be made visible only to Spectre at each collapse, so use your skills like rolling, increased speed, and the Tracker perk to slash and bash foes with chained sword attacks! Plus, Shadow Blade assassinations refill your stowed weapon ammo and health. The last player standing wins!

There’s an ominous ‘Super Blood Wolf Moon’ in the skies above Alistair Rhodes’ mansion, as Zombies fans can attempt 30 frantic rounds of challenges in this increasingly hairy “Dead of the Night” Gauntlet! 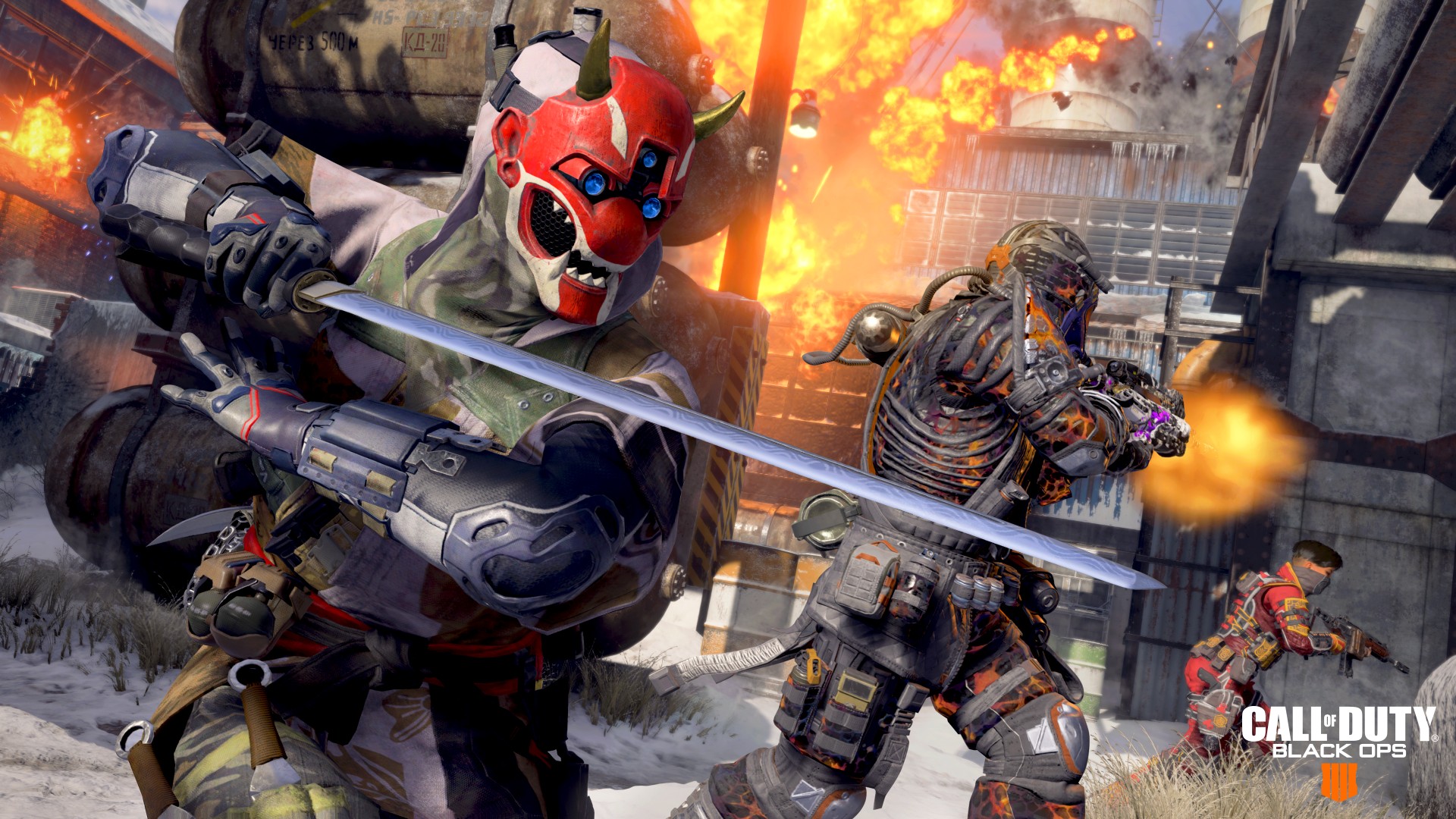 Bring up the Black Market to check out some newly stocked content, with many outfits and weapons featuring an assassin theme. There are also Blackout Characters, and new weapon charms and death effects. Highlights include: 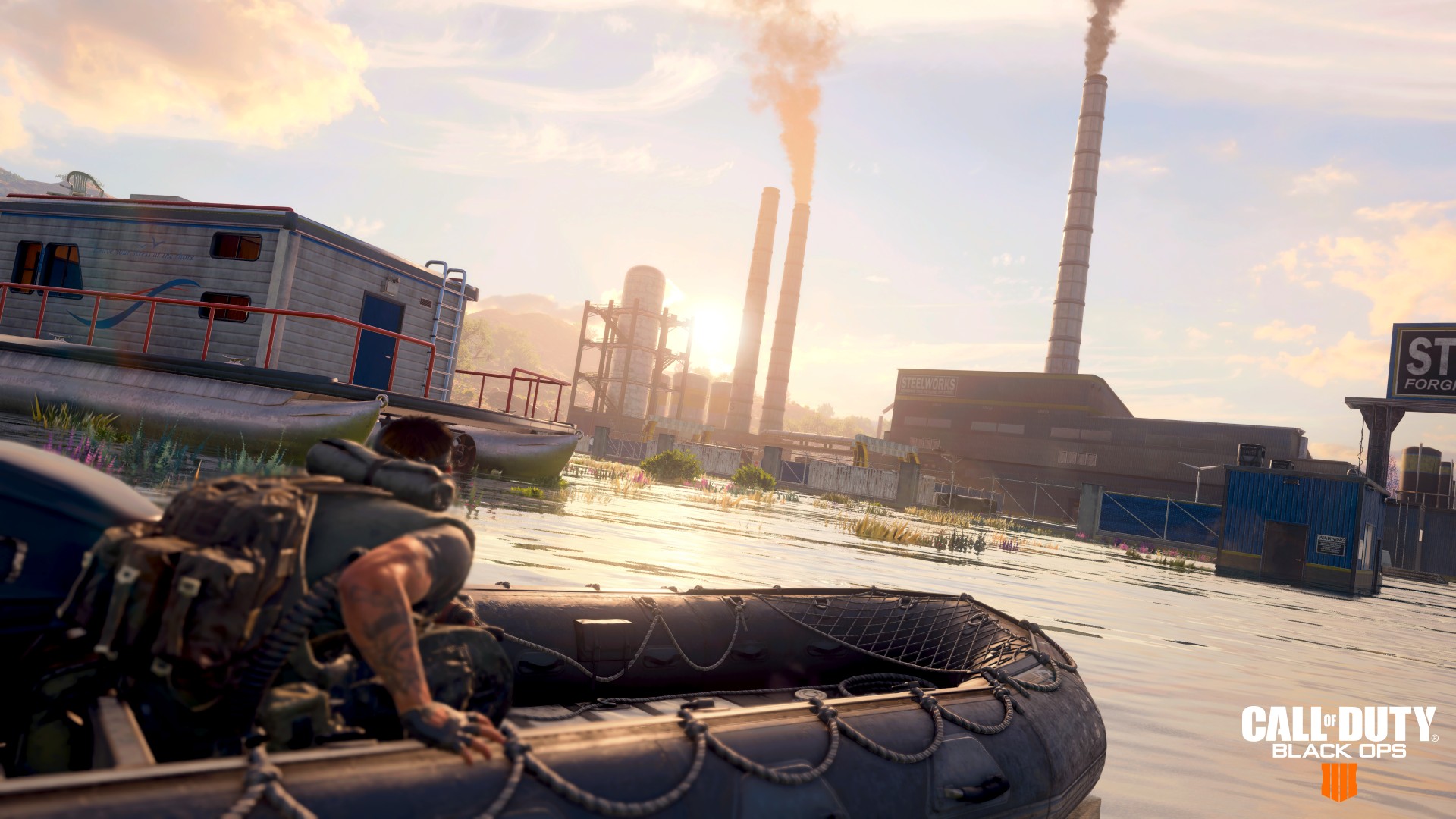 If you have the Black Ops Pass, you can expect the following content:

Reimagined Multiplayer Map, WMD: This Black Ops fan-favorite reimagined map takes place in an active WMD facility (beware of the Nova 6!), so expect a mix of interior and exterior engagements, with a variety of catwalks, pipework, and ladders resulting in combat from every angle and range.

New Multiplayer Map, Artifact: Journey to Iceland to join archaeologists and treasure hunters as they converge on a melting glacier, discovering an ancient artifact. Watch out; there are rivals who also seek to claim this relic! Watch for thermal geysers that spell instant death for those caught in an eruption, slide icy slopes, and explore frozen caverns.

New Multiplayer Map, Masquerade: An attempted breach into the US embassy compound close to a claustrophobic city market is the scene for Masquerade. Using a happy aquatic festival as cover, elite assassins have hijacked the parade floats, ramming their way into the embassy, now under siege in this chaotic and colorful location.

New Blackout Character, Uncle Frank: The venerable Master Sergeant and Vietnam War veteran version of Frank Woods makes a welcome return to Black Ops. With Black Ops Pass, you can play as him in Blackout. 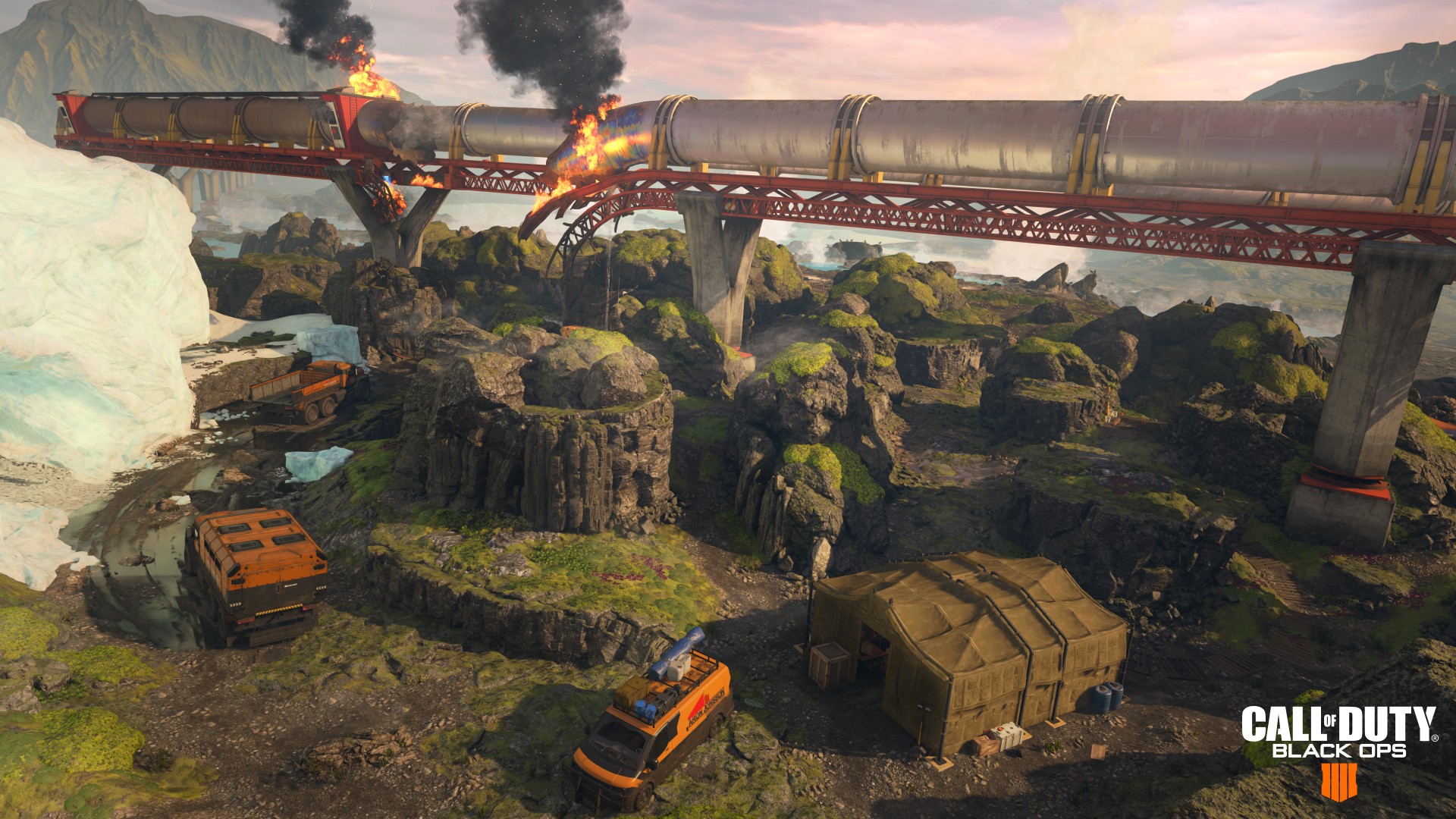 Stay tuned to Xbox Wire for all the latest news about Call of Duty: Black Ops 4 on Xbox One.

Related:
Save up to 80% in the Capcom Publisher Sale on Xbox One
Uncover Ancient Secrets in Valencia, Black Desert’s New Desert Region Update
The Future is Yours in Fortnite Season 9 on Xbox One