Oninaki, the third game by the team at Square Enix’s Tokyo RPG Factory, releases on PS4 August 22. Following up JRPG tributes I Am Setsuna and Lost Sphear, Oninaki features a bold, anime-influenced art style with expressive characters and gorgeous lands to explore.

We reached out to Square Enix to get a closer look at the concept art behind some of Oninaki’s vibrant locales, objects, and enemies. The captions below are written by producer Ryutaro Sasaki, and you can click through on each image for a higher resolution version.

Great Plain
Drawn by Background Designer Oga Takeshi
“This image board is for a place that we called the “Great Plain” during the early stages of development, and it was very useful for solidifying the visual image of the world of the dead, Beyond the Veil. We have created a setting that is not just a dark and cold land of the dead, but also has a mysterious and fantastical atmosphere, with interesting features such as the pale lights that appear to shine up from the ground and the uniquely shaped trees that are reminiscent of Eastern designs and traditional Japanese aesthetics.”

Drawn by Background Designer Oga Takeshi
“In order to create the unique setting for this title, we deliberately utilized a variety of Eastern design influences. This image board is for the capital city of Szaka, which has a particularly strong central Asian flavor. Special care was taken when depicting the cityscape, centered on the sovereign’s palace that symbolizes the precept of reincarnation itself, as well as the uniquely expressive sky, possessed of a character that is at once the glow of dawn and the haze of sunset.” 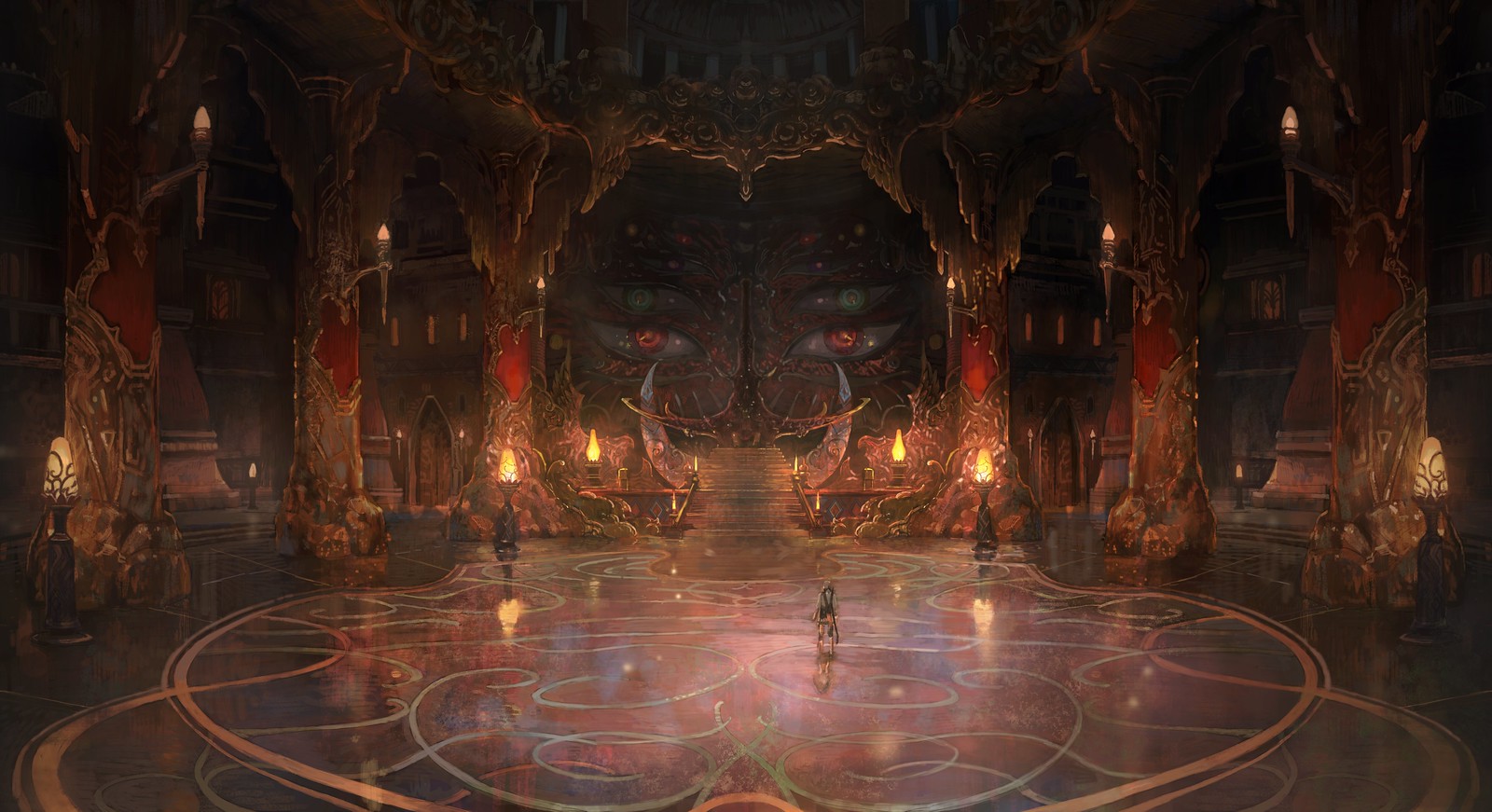 Ehir Palace
Drawn by Background Designer Oga Takeshi
“This image board depicts the throne in Ehir Palace, residence of the sovereign who rules over the capital Szaka, and by extension the Inner Kingdom where the story of Oninaki is set. Steeped in an aura of dread majesty, this throne has been the seat for generations of sovereigns who embodied of the precept of reincarnation. The current incumbent is Lady Lobelia.” 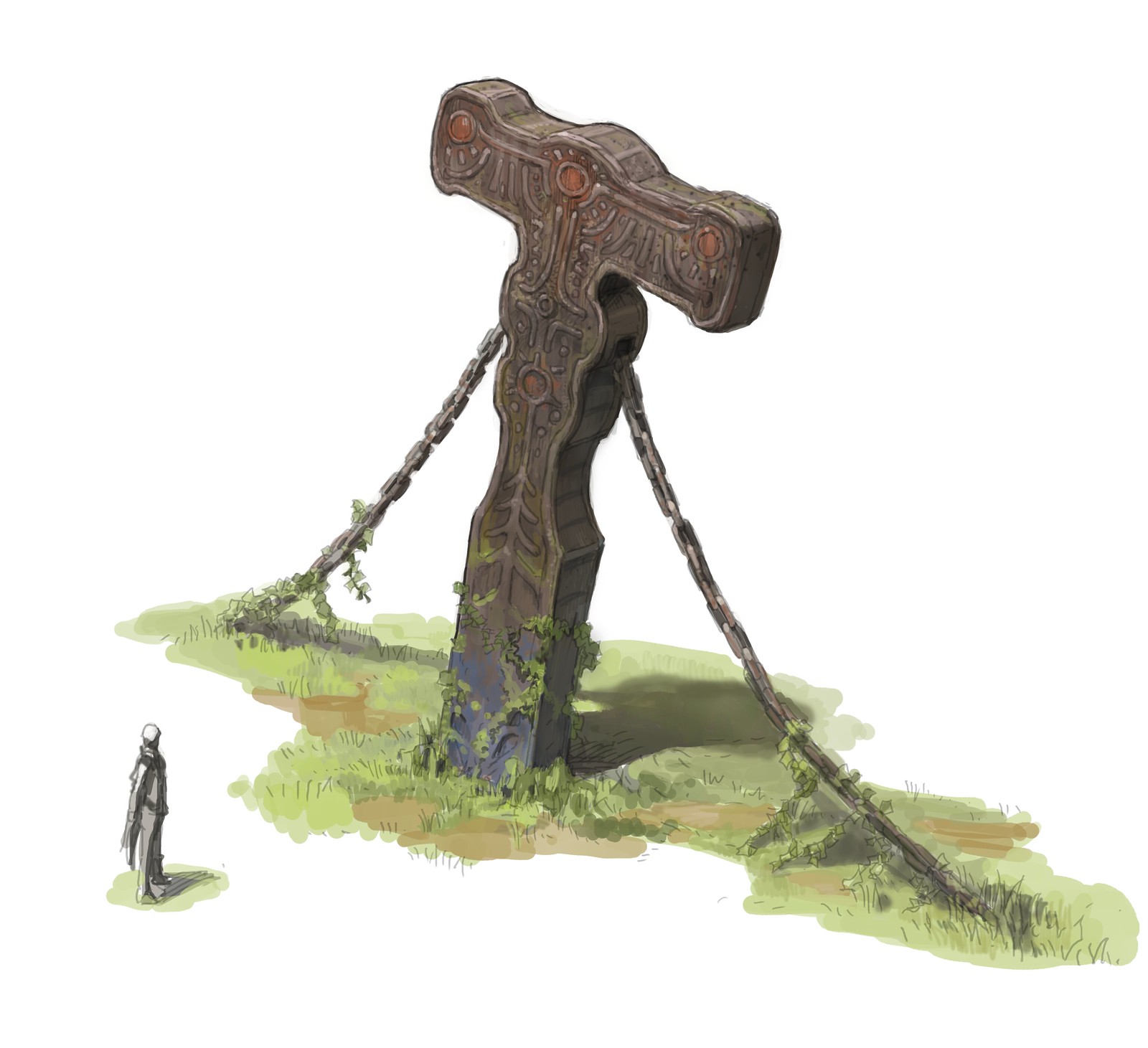 World Pillars
Drawn by Background Designer Oga Takeshi
“This is a design for one of the objects known as the World Pillars that can occasionally be seen in the world of Oninaki. Nobody knows who built these artefacts or for what purpose, and their true age is unknown, yet they project a solemn sense of gravitas and the passing of the ages.”

Objects of the Inner Kingdom
Drawn by Background Designer Oga Takeshi
“The objects shown in these designs offer a window into the lives of the regular people who live in the Inner Kingdom. Many Asian influences have been incorporated into the designs for the cityscape and the pillars, such as objects resembling Shinto shrines and Buddhist jizo statues. However, when combined on the streets of Szaka, it results in a unique visual atmosphere that appears neither wholly Eastern nor Western.” 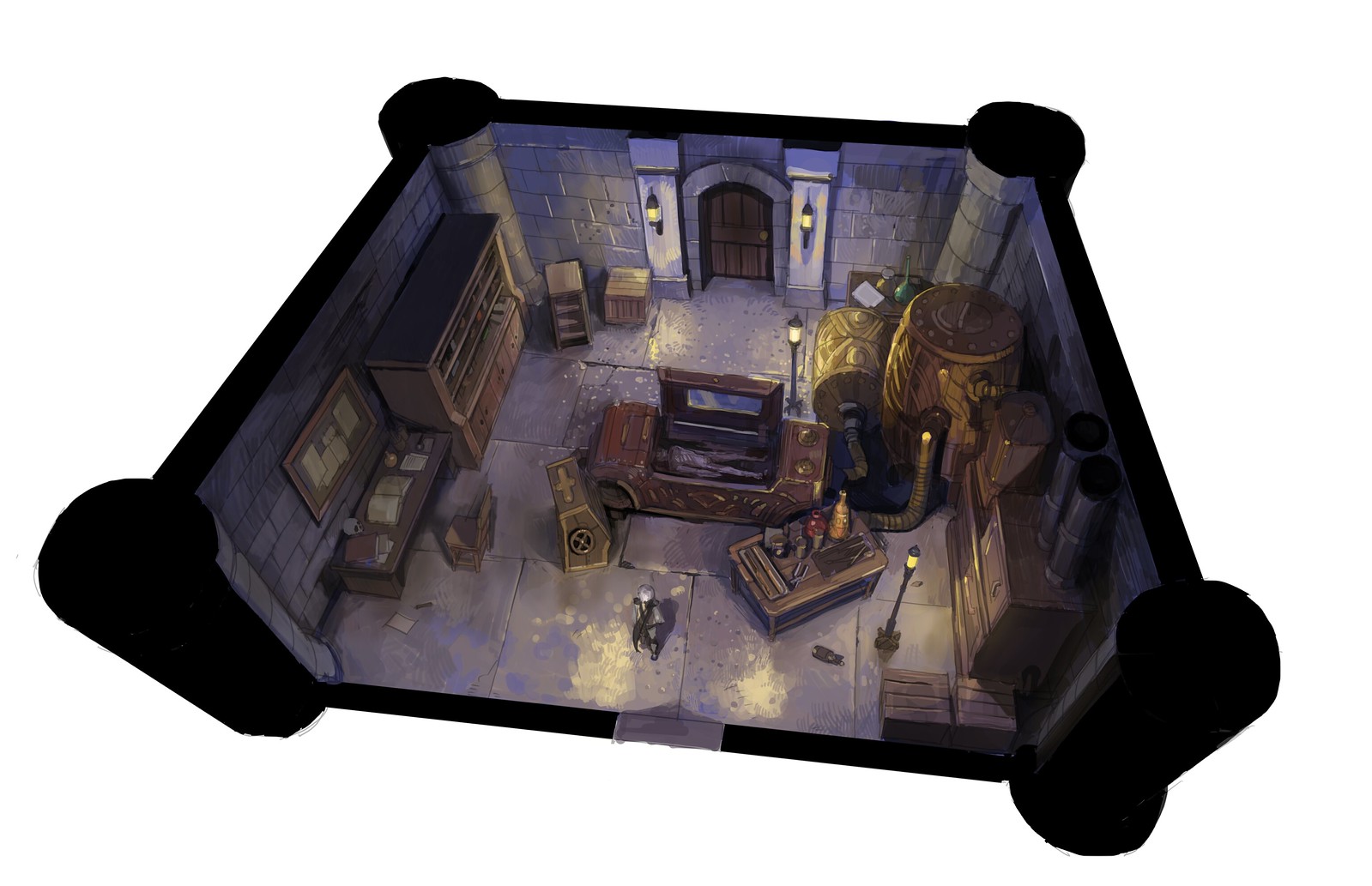 Research Room
Drawn by Background Designer Oga Takeshi
“This is a design drawing for a certain research facility that exists somewhere in the world. As for who works here and what kind of research they are doing in this dark, windowless room… you will just have to find that out yourself!”
Fallen Souls 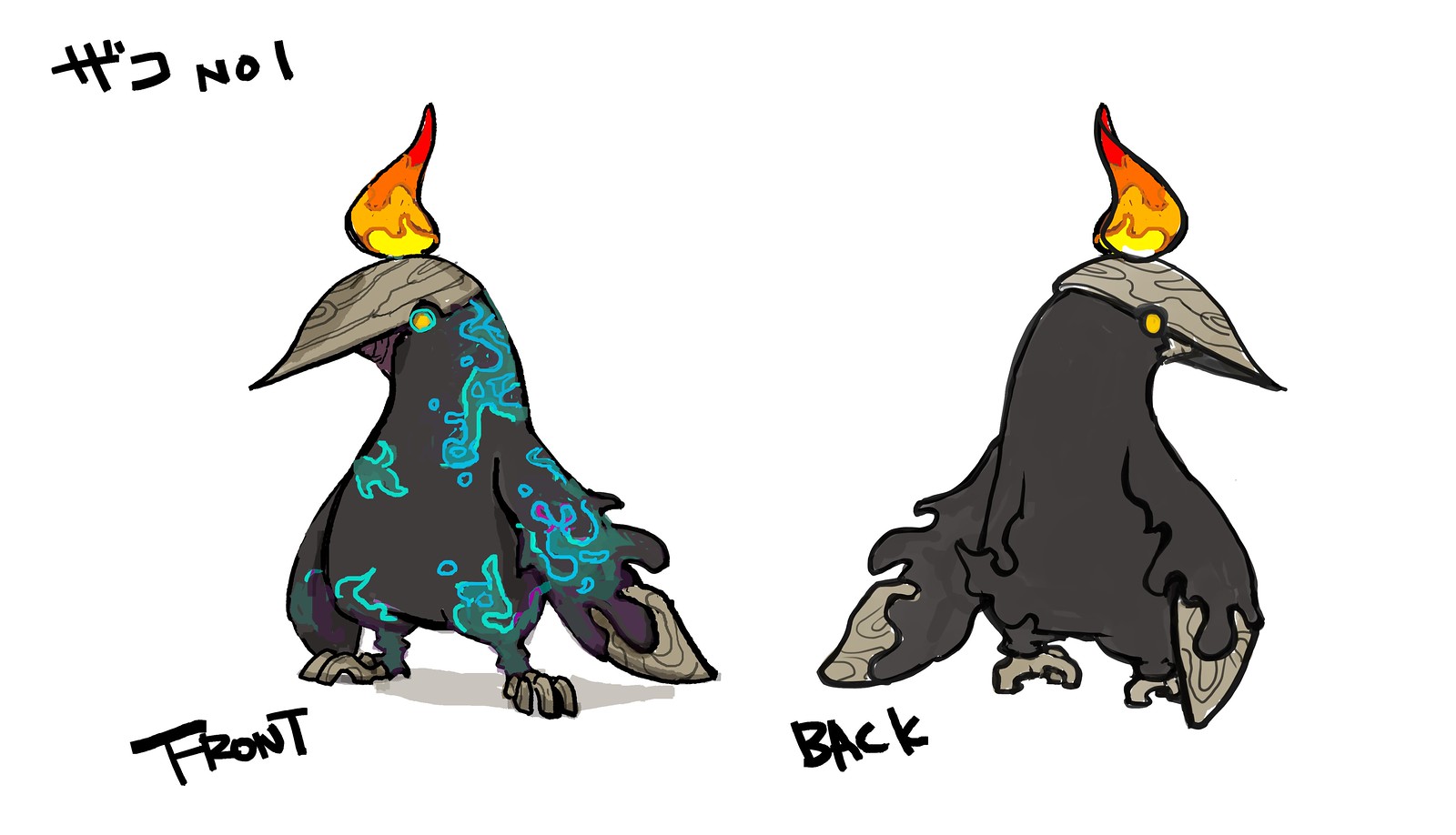 Fallen Soul 1
Drawn by Monster Designer Morinaga Koji
“The design for this Fallen Soul is based on one of the monsters that appears in all Tokyo RPG Factory games. In the world of Oninaki, when people who have become estranged from the wheel of reincarnation eventually perish, they will transform into the Fallen, and the particle like pattern on its body is based on this concept. I think that the gently flickering flame on its head is quite charming.” 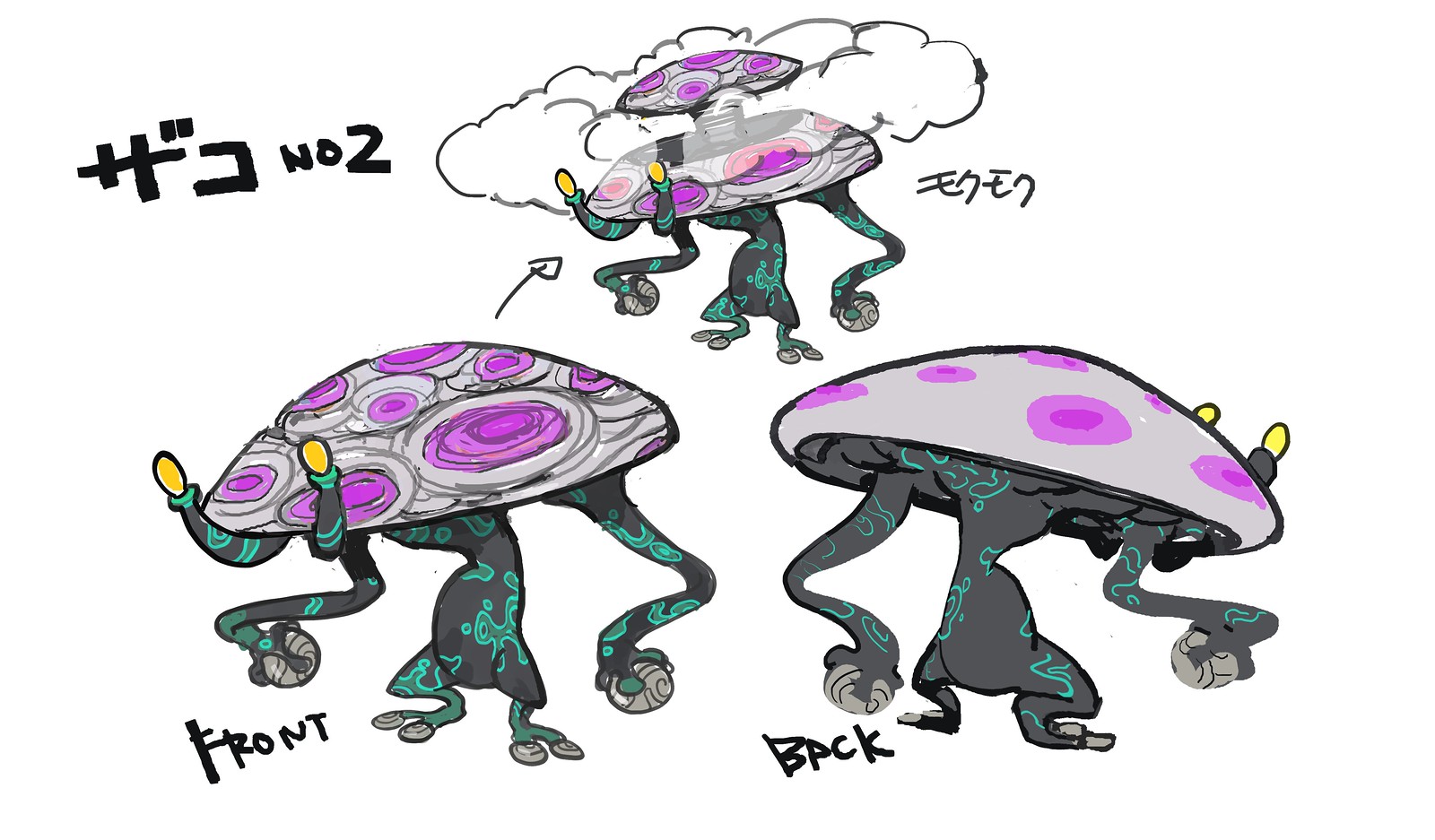 Fallen Soul 2
Drawn by Monster Designer Morinaga Koji
“This is a design for a Fallen Soul with a fungoid aspect. You can see how it attacks by billowing spores from its head, an attack that will cause no end of grief for Kagachi in the game.” 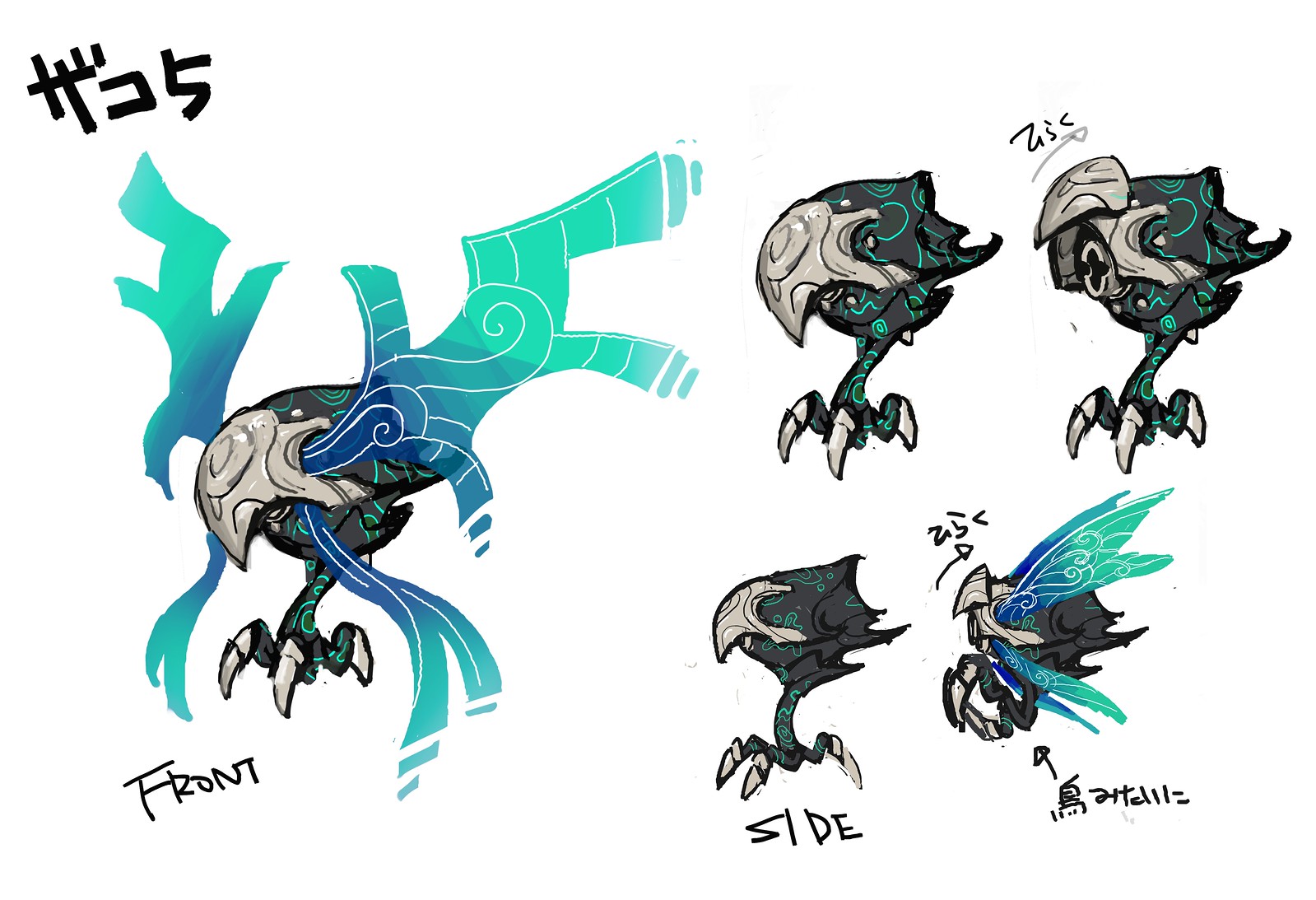 Fallen Soul 3
Drawn by Monster Designer Morinaga Koji
“This Fallen Soul is an airborne type. The distinctive design features translucent wings and a single strong leg, and reminds you that the fallen in the world of Oninaki were all originally human. It gives a sense of the fleeting beauty in all living things.”