Hello! I’m Yuts, a member of the game development collaborative Geography of Robots.

We released our first game Norco in March and are now bringing it to consoles with the help of our publisher, Raw Fury. The game’s a first-person point-and-click adventure in the style of classics like Snatcher, Rise of the Dragon, and Deja Vu. You play as Kay, a transient young woman who’s returned to her hometown of Norco, Louisiana following her mom’s death only to discover that her brother has gone missing. Through this narrative, the player explores an uncanny and surreal depiction of South Louisiana filled with deranged ditch prophets, influencer cults, distributed flesh AI, and other visions of an alternative present. We’ve been surprised and extremely appreciative of the reception that the game’s been receiving, having won the first-ever Tribeca Games Award in 2021, as well as the “Long Feature” award at Berlin A Maze fest.

The game got its start as an informal geography project following Hurricane Katrina. A close friend and I were traveling around South Louisiana, taking photographs and conducting interviews to understand how the storm impacted our home. I’m from Norco, so I was particularly focused on both the town and the surrounding “River Parish” region. We conducted this project from around 2007 to 2010. From there, I started experimenting with open-source libraries online, learning pixel art and basic game design. I used this to build a side-scroller prototype based loosely on the observations and research we’d been collecting. I began collaborating with the sound artist “Gewgawly I” during that period, and the project quickly grew in scope.

Around 2020, after signing with Raw Fury, Aaron Gray came on board to help port the game from a JavaScript library to Unity. The incredible traditional painter Jesse Jacobi joined up with our crew the following year to assist with pixel art. By the time the game launched in March, we had a small team and a supportive community.  We’ve been spending the past several months adding quality-of-life features to the game. These include a combat bypass; an “expert mode” for players who want more challenging puzzles; custom fonts; and gamepad support that we very much hope console players will find comfortable and intuitive.

Norco is available right now with Game Pass on Xbox Series X|S, Xbox One and PC. We hope you enjoy it! 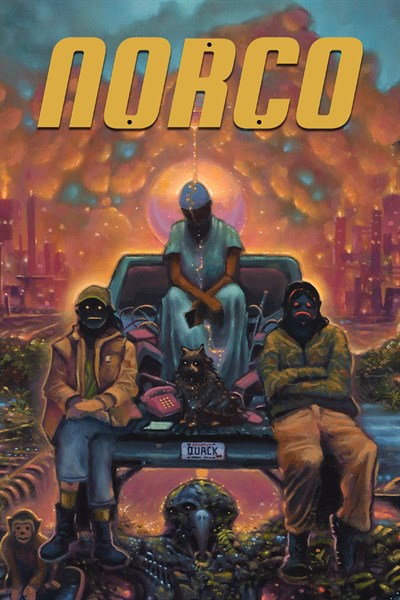 ☆☆☆☆☆20
★★★★★
$14.99 $11.99
PC Game Pass
Xbox Game Pass
NORCO is a text-based point & click adventure that immerses the player in the sinking suburbs and industrial swamplands of an increasingly surreal and distorted South Louisiana. Your brother Blake has gone missing in the aftermath of your mother’s death. In the hopes of finding him, you must follow a fugitive security android through the refineries, strip malls, and drainage ditches of suburban New Orleans. Immerse yourself in a surreal and uncanny South Louisiana:
NORCO’s painterly and cinematic pixel art draws the player into its quotidian sci-fi world of disappearing swamplands, labyrinthine oil refineries, and other landscapes inspired by the titular town of Norco, Louisiana and other parts of Greater New Orleans. Sink into the rich field recordings and sound design by fmAura and a driving, post-industrial electronic score from Gewgawly I. Unravel a mystery in a world haunted by the past and threatened by the future:
What starts as a straightforward search for your missing brother quickly spirals into a multigenerational mystery. The lines between salvation, memory, technology, and nature bleed together into a uniquely compelling, contemplative narrative rooted in Southern literature, pulp fiction, and point & click adventure games both classic and contemporary. Explore alongside sharply drawn characters with deep roots, rich backstories, and complex motives:
A chaotic bayou pirate, bar-stool private detective, escaped security android, and your stuffed childhood monkey will all offer assistance in an eroding and uncertain world. Solve puzzles, fight your way past corporate security goons, and infiltrate an influencer cult squatting an abandoned mall on the outskirts of New Orleans.“