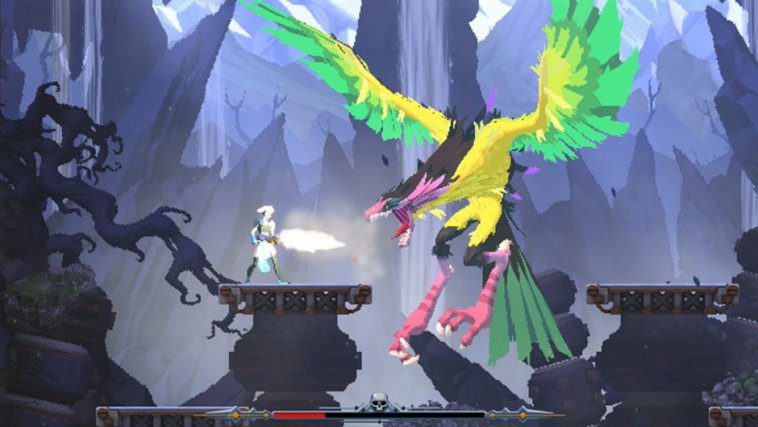 Foregone is a fast and fluid 2D action-platformer packed with legendary loot and stunning pixel art. Collect an arsenal of powerful weapons and unravel a compelling story of regret and conspiracy as you slice your way through hordes of enemies to save Calagan.

A classic team-based third-person shooter where you play as your favorite characters from Team G.I. Joe and Team Cobra. Experience the action from both sides as you help G.I. Joe restore order and lead Cobra to world domination.

Carve your path to superstardom in an expanded Be A Pro mode and go down as one of the league’s greatest. On the ice, change up your attack with all new moves, dekes, dangles and evasive maneuvers, inspired by the league’s most groundbreaking innovators. Pre-order NHL 21 and you’ll be able to play NHL 94 Rewind Edition on October 30. NHL 21 Standard Edition launches October 16.

Dive into this dynamic arcade game that puts you right in the middle of thrilling battles with a fresh arcade style. In the aerial dogfights of World War I, only supreme skill separates the victors from a fiery end. Jump in, take off, and discover your fate!

It’s been centuries since the events of Torchlight II, and the Ember Empire is in decline. In Torchlight III, Novastraia is again under threat of invasion and it’s up to you to defend against the Netherim and its allies. Gather your wits and brave the frontier to find fame, glory, and a new adventure!

When a friend is captured, it’s up to the rest of the brotherhood to pick up their guns and take down the enemy army! In this pixelated action platformer, you’ll run, jump, shoot and dodge roll your way through the opposition to bring your buddy back.

Compete against friends or other players online for Brunswick Bucks! Use those winnings to upgrade equipment and tables. Players can also hone their skills against A.I. opponents, battle friends in local multiplayer matches, and play single player Challenge Modes offering a variety of gameplay options.

Set in the radically-changed war-torn America of 2042, play through a new story-driven campaign where you cook hundreds of foods across hundreds of levels in a new gameplay structure that has been completely redesigned to deliver fast-paced action. Or take it easy with the all new Chill Mode that can be toggled on or off at any time!

Saddle up for a bike-riding, friendship-building, frisbee-throwing, goose-petting, treasure-hunting adventure for 1 or 2 players! Play as Nessa & Demelza as they explore an ancient island with their pet goose Captain Honkers, riding and upgrading their bikes on a quest for treasure, adventure, and an end to childhood boredom!

There’s only 3 weeks left until prom and you haven’t got a date yet… and you’re a monster. But that’s okay ‘cause at your high-school everyone else is too! These are the stepping stones into the world of Monster Prom: XXL – the bundled up, content filled edition of Monster Prom, a one-to-four player competitive dating sim that will have you thinking: I never knew I was into that!

Xbox Play Anywhere – This game is a unique mix of rogue-like with dungeon exploration, RPG, turn-based tactics, and collectible card game. At the base of the turn-based system are not turns, but time. Find and improve new heroes and get coins to buy new spells. But remember, a hero’s death will be fatal.

Trapped in a ghostly train, Saki must search the past and present to find and save her friends. More importantly, Saki must use her wits if she is to survive against an unspeakable evil hellbent on avenging unrequited love.

Xbox One X Enhanced – An arcade style ninja action game where you play the role of ninja order master Dan. Your mission is to rescue your family from the Shadow Force crime organization by using your ninja transformation ability and your special powers to venture over 10 levels, defeat six bosses, save your family, and defeat the Shadow Gangs.

Are you ready to explore the wilds of the Australian Outback in this remastered version of the classic game, TY the Tasmanian Tiger? Join Ty on a ripper of an adventure to free his family and stop the nefarious evil genius Boss Cass from removing mammals from the top of the food chain. To help you on your quest, you have an arsenal of boomerangs, sharp teeth, and the help of a few friends.

Xbox Game Pass for PC – Age of Empires III: Definitive Edition completes the celebration of one of the most beloved real-time strategy franchises in definitive form. Command mighty civilizations from across Europe and the Americas or jump to the battlefields of Asia in stunning 4K Ultra HD graphics and with a fully remastered soundtrack. Experience two new game modes: including all previously released expansions and 14 civilizations, plus two brand new civilizations – the Swedes and Inca. Return to adventure with this final chapter in the Age of Empires Definitive Edition journey.

A frantic four-player party game where adorable drawn-to-life cakes beat the crumbs out of each other. Pick your favorite cake and battle in a variety of lifelike arenas with unique goals – cover yourself in sweeties or hurl fruit into a pie, there’s plenty for everyone! Guide your cakes through the bakery as they dress to impress the customer.

A neon-noir story in a rain-drenched cyberpunk metropolis. It’s your first night on the job working for the Cloudpunk delivery service. Two rules: Don’t miss a delivery and don’t ask what’s in the package. In this story-based exploration game, you will meet a diverse range of characters including androids, AI, and unscrupulous humans at every level of society.

Get those blades spinning and load up on guns and ammo, the time has come to rebuild humanity! Dustoff Z is a game about maneuvering combat-helicopters in one of the harshest weather conditions possible – A Zombie Apocalypse.

Grab one another’s hands, climb across dangling bodies, and swing your pals to safety in a wobbly, dangly mass of limbs. Customize your character with all manner of stylish accessories and zany accouterment in a vain attempt to remember who you are and which of your hands is the only thing between you and the plummet of doom.

A stylish neo-noir, action-platformer featuring breakneck action and instant-death combat. Slash, dash, and manipulate time to unravel your past in a beautifully brutal acrobatic display. Overcome your opposition however the situation requires. Deflect gunfire back at foes, dodge oncoming attacks, and manipulate enemies and environments with traps and explosives.

An action-adventure game set in ancient India. Play as a young girl named Raji who has been chosen by the gods to stand against the demonic invasion of the human realm. Her destiny? To rescue her younger brother and face the demon lord Mahabalasura.

A strategy RPG and turn-based tactics game set in the beautiful world of Estera. Build a party of unique characters and customize their extensive skillset to your own tastes. Lead your party across Estera in search of the lost city of Avalon, engaging in thrilling turn-based battles in this unique tactical experience.

Explore a delightful but dangerous overworld, brave menacing dungeons, and improve your hero in a charming village, during your quest to overcome the evil that plagues the island. Unleash the mystical Sword of Ditto and grab a co-op friend for an unforgettable adventure filled with delightful characters, extraordinary loot, and heroic battles!

This is the Zodiac Speaking – October 15

A fact-based, single-player psychological thriller based on the story of Zodiac, one of the most famous never-caught serial killers. It mixes vintage ’70s California visuals and an original epic cinematic soundtrack with gameplay elements that include classic horror, investigation, stealth mechanics, and multiple endings to discover.

Robot Z3-L1’s ship has crash landed on an inhospitable planet called Dimidium filled with alien landscapes and hostile surroundings. To escape and return home, Z3-L1 (/zeli/) must gather clues, gain powers and discover artifacts needed to fix a spaceship. Explore the planet in this metroidvania-style exploration game where the environment is your enemy!

Space Crew is the sequel to acclaimed strategic survival simulation game Bomber Crew. It’s your responsibility to help stop all of humankind from being wiped off the intergalactic stage by the mysterious extraterrestrial threat known as the Phasmids. With every purchase of Space Crew until October 22, you will receive Bomber Crew for free.

Five new games: the hit threequel Quiplash 3, the collaborative chaos of The Devils and the Details, the fierce drawing game Champ’d Up, the speech game Talking Points and the guessing game Blather Round. Use phones or tablets as controllers. Play with up to 8 players, and an audience of 10,000!

Play as the Chinese fisherman Wei Cheng who wants to avenge the death of his friends and family. Get your battle staff ready for a challenging adventure in Medieval China and for merciless fights with hordes of various enemies.

Related:
Power Your Dreams with a New Generation of Xbox
Head Out on the Track in the All New Assetto Corsa Competizione GT4 Pack DLC
Meet the Cakes from Cake Bash, Coming to Xbox One October 15