Greetings heroes and villains! Today, a new team of superheroes soars into DC Universe Online with our new event and episode: Birds of Prey.

An unhinged Lex Luther is threatening Metropolis with an unruly cast of supervillains to reign supreme. Oracle (previously known as Batgirl) has insider knowledge to help bring down Luthor’s plan but can’t do it alone. She calls up some old friends of hers – Black Canary, Harley Quinn, The Huntress, Catwoman, and Poison Ivy – to help contain the rapid downfall of the city.

Players on Xbox One will work alongside the Birds of Prey in new locations like Oracle’s iconic Clock Tower base and Lex’s Volcano Mining Facility. You’ll face off against hard-hitting enemies like Brimstone, Lobo, and Amazo. The team has also updated character models for all five new members of the Birds of Prey.

You can download DCUO for free from the Microsoft Store on Xbox One (Xbox Live Gold subscription required). Once you start the game, choose your morality, mentor, and powers to use in battle. Then create and customize your unique character and start your adventures in the iconic DC Universe!

For additional content details and guides to get started in DCUO, please visit us at DCUniverseOnline.com. Now suit up, head to Metropolis, and help the Birds of Prey! 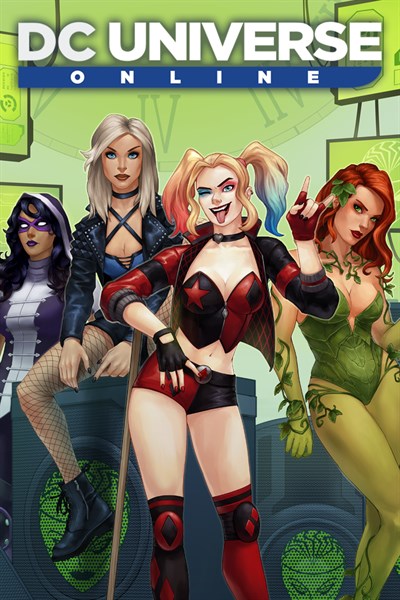 ☆☆☆☆☆ 791
★★★★★
Get it now
DC Universe™ Online is now on Xbox One! Join thousands of other players in this Free-to-Play, massive online action game set in the popular DC Comics universe. Choose your side – Hero or Villain – and create your character to experience true action combat, as you fight alongside and against legendary characters such as Batman, Wonder Woman, Superman, Lex Luthor, and Circe. Jump in and explore the DC Universe; walk the darkened streets of Gotham City, investigate the mysteries of the futuristic cityscape of Metropolis, and travel to legendary locations such as Arkham Asylum and the Watchtower. The Xbox One version of DC Universe Online includes the following: – Xbox One Exclusive items: Powered-Up Character Emblem + Powered-Up Cape + Vapor Aura! Become a part of our thriving community at DCUniverseOnline.com! Please note the download is around 35GB and could take several hours, but it’s worth the wait! Bandwidth requirements may exceed 192 Kb.