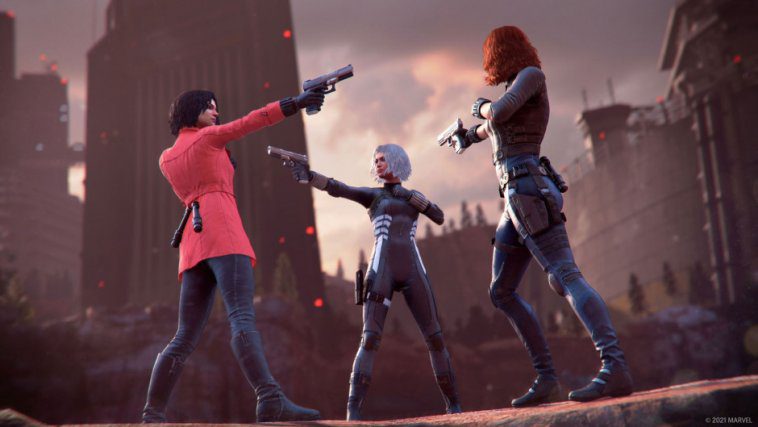 We first revealed the Tachyon Anomaly event one month ago at Square Enix Presents, and we’re eager to dive into the details to prepare you for its arrival on April 22! Being able to have a Strike Team composed of more than one of the same Hero has been a much-requested feature in the past, so we’re excited to see everyone jump in!

AIM’s tampering with time has led to periodic Tachyon Anomalies. Whenever these events occur, Avengers from different timelines can converge in a single location and take on the world’s threats together. The first Tachyon Anomaly is happening from April 22 to May 3 and allows players to form teams of more than one of the same Hero. Players can also matchmake into teams that contain the same Heroes, meaning you’ll never know what combination you may be part of.

During these two weeks, there will be a weekly mission chain that rewards Hivemind set gear, and daily missions that reward priority set gear for high-level Heroes.

We’re also introducing Temporal Assault nameplates, which are animated nameplates you can earn to add some shine to your experience. You’ll receive an animated team nameplate as a reward for the first completion of the weekly mission chain that can be used on any Hero!

There are also Hero-specific animated nameplates that will be available in the Marketplace:

Let us know what you think of this event and if you want it to return!

Tachyon Rifts are timed missions that usually require power level 140+, with only one appearing on the War Table per week. These missions reward powerful cosmic gear that can allow Heroes to gain willpower (life) upon attacking enemies. To unlock Tachyon Rift missions, players must complete the SHIELD Substation Zero mission chain that takes them to the Pacific Northwest.

If you and a friend are both Iron Man mains and haven’t been able to play together because of the restrictions, make sure to tell them about this event because you can have a Strike Team full of fliers now. We’d love to see some air formation videos!

We invite you to take screenshots of your team in the Temporal Assault event and to tag us in all your photos so we can see how creative you are – we’re @PlayAvengers on Twitter and Instagram!

☆☆☆☆☆ 423
★★★★★
$59.99
Get it now
Marvel’s Avengers is an epic, third-person, action-adventure game that combines an original, cinematic story with single-player and co-operative gameplay*. Take the essential Super Hero gaming experience to another level! Marvel's Avengers will be available for next-gen consoles at no extra cost.* This version will boast a wide spectrum of improvements to visuals and speed, and will be backwards compatible in single and multiplayer. Marvel's Avengers has a beautiful world filled with exquisite detail, and with improved Heroics, destruction, graphical fidelity, and framerate versus previous gen, you won't be missing any of it. Get right into the action with fast loading times and be blown away by the striking detail of enhanced destructive visuals that make Heroics feel truly in your hands. Marvel's Avengers will support save file transfer and cross-gen play so you can pick up right where you left off and continue fighting AIM with your favorite Super Hero squad. We're excited to herald in the next generation of consoles on Marvel's Avengers! Marvel’s Avengers leverages the Smart Delivery technology – buy the game once and play it on either Xbox One or on Xbox Series X|S. Marvel's Avengers on Xbox Series X|S is available now!*** *One-time online access required for single-player campaign; online access required for multiplayer and to download post-launch content. Free Square Enix Members account required. Platform-specific online subscription fee may be required. *Upgrading from the disk version will require the next-gen version of the same console with a disk drive. **Credits that you purchase are useable on Xbox Series X|S Console version of Marvel’s Avengers. Please be aware that the Credit that you own is synced with your Microsoft account, and the wallet will be shared through both platforms.