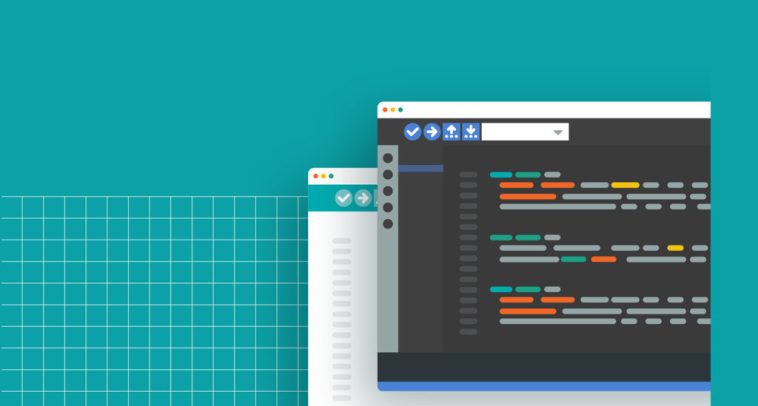 We’re pleased to announce that as of today Arduino IDE 2.0 has moved to Stable and is available for download. Since the launch of the Beta version back in Spring 2021, the feedback received from the active Arduino community has enabled us to focus on what’s meaningful to the widest user-base. It carries a modern editor and provides a better overall user experience thanks to a responsive interface and faster compilation time.

Over and above the core features (we’ll get into those in more details later) the IDE 2.0 benefits from a number of enhancements and additional support. The Serial Monitor and Plotter can be used together, enabling users to have two viewports onto their data output. Before you had to choose between text and graphs, whereas now you can have both.

As well as the refreshed User Interface that provides a more intuitive experience whilst using Arduino IDE 2.0, speed is of the essence. An Arduino-optimized code-completion and code-assist within the language server, help you write code quickly and spot errors as you type. The enormous amount of user feedback allowed us to identify the weakest spots such as code assist and completion, serial output, loading and compilation time.
We made it all better now.

A special mention goes out to Paul Stoffregen who has provided enormous feedback to the IDE development team and been actively developing the initial support for advanced third-party platforms such as Teensy for IDE 2.0 (currently experimental).

If you haven’t already given the new IDE 2.0 a try, here are just a few of the key features…

While typing, the editor can suggest the autocompletion of variables and functions according to your code and the libraries you included:

When right-clicking on a variable or a function, a contextual menu will provide navigation shortcuts to jump to the line (and file) where they are declared:

If your eyes are feeling the strain you can quickly change settings and switch to Dark Mode.
Some of you may have used this during the Beta, but our design team has reworked the entire Dark Theme to make it more consistent, beautiful and easy on the eye.

Never lose a sketch keeping them safely at Arduino Cloud

For people who work on multiple computers or want to store their Sketches securely in the Cloud, the Remote Sketchbook integration is a really useful feature.

For now, all the sketches you have in Arduino Cloud and Arduino Web Editor can be edited in IDE 2.0 .

Easily switch from one computer to another and keep working. If you don’t have Arduino IDE 2.0 installed on all your machines, just open the Arduino Web Editor and you can code from your browser in the online IDE with access to all your sketches and libraries. There’s no need to worry about losing your sketches either, with Remote Sketchbook you only need one click and they will be pushed securely to the Arduino Cloud.

Work offline and sync later, simply bring your sketch down from the Cloud, edit offline and when you are back online click on “Push” and all your changes will be uploaded, meaning all your sketches will always be up-to-date and ready to use.

The IDE 2.0 features a richer Serial Plotter that is a versatile tool for tracking different data and variables which are received from your Arduino board. The Serial Plotter is a really useful visual tool that will help you to understand and compare your data points better. It can be used for testing and calibrating sensors, comparing values and other similar scenarios.

Our users have always been accustomed to receiving notifications when new boards’ support or libraries updates were available, and IDE 2.0 is no exception.
As a plus, the IDE can now itself be updated when a new version is available, so no need to head to the downloads page anymore: click the button and get the latest and greatest.

The new IDE is based on the Eclipse Theia framework, which is an open source project based on the same architect