Fresh off the launch of the critically-acclaimed Gears 5, The Coalition, in partnership with premier esports operator PGL, are excited to unveil the details for the next season of Gears Esports.

The 2019-2020 season will be the biggest offering in Gears of War esports history. We’ve added a Pro League, new regions (South America and Asia Pacific) and increased travel prizing, giving more opportunities for eligible players of all skill levels the ability to compete for more than $2 million worth of prizing.

This season of Gears Esports will feature regular online competition, and a number of live events, including four major international opens, regional LANs, and local competitions hosted at Microsoft Stores. 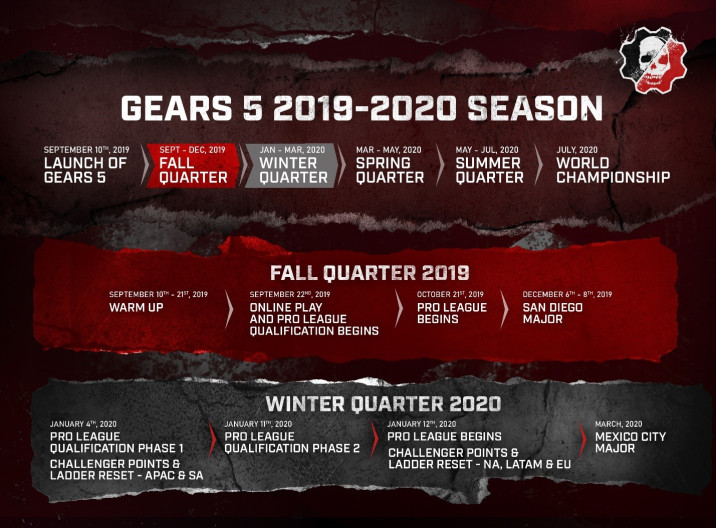 The 2019-2020 Gears Esports season will be divided into four quarters, each capped off with a major international event. Brand new for Gears 5, the Pro League will feature the top teams from our biggest regions placed into four divisions: North America Alpha, North America Bravo, Latin America and Europe.  A four-week online qualification period consisting of Ladder and Weekly Tournaments will begin on September 22nd to determine the four teams in each division. Once Pro League play starts in October, every team will play against every other team in their division online twice over the course of six weeks for cash prizing and seeding considerations leading into first major of the season, which is set to take place in San Diego from December 6-8, 2019. After each major event the bottom placing team from each Pro League division will be forced to requalify for their spot against the top Challenger teams in their region. The season will then culminate in a World Championship in the Summer of 2020.

For more about the upcoming season of Gears Esports including how to compete, please visit www.gears.gg.

Related:
Enter the Dark Multiverse of DC Universe Online Today on Xbox One
Next Week on Xbox: New Games for September 16 to 20
Take to the Ice Today in EA Sports NHL 20, Available Now on Xbox One