One week from now Elite Dangerous will change. Elite Dangerous: Beyond — Chapter One is the first of four free updates launching in 2018 focused on community-requested core changes to the overall experience of the game, together with fresh content for Commanders to experience as you explore the Milky Way.

Last year PS4 players launched into Elite Dangerous’ massively multiplayer full-scale simulation of the Milky Way. Starting with a small spacecraft and a handful of credits, we want you to make your own way in the galaxy however you choose. Trade, fight, mine, explore, hunt, or just survive — the choice is yours.

From the very beginning an important part of Elite Dangerous has been the feedback we receive from our community. Your actions influence the galaxy and the ongoing story, but it also changes the way we develop the game. Your feedback has shaped our third season of content updates, and that’s why we wanted to give it to all Elite Dangerous players for free. 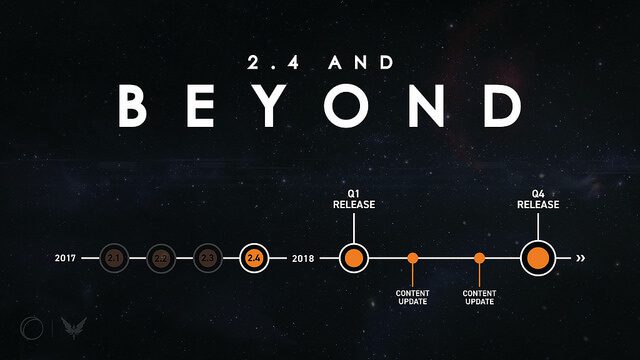 Beyond — Chapter One will launch February 27 with an automatic update for all Elite Dangerous owners. You’ll find lots of small changes we hope will improve the ways you choose to play, but here are some of the big things we’re most excited about everyone experiencing in Beyond — Chapter One.

1.) A fairer Open Play environment, and a challenging career for criminals with the new Crime and Punishment system.

The Crime and Punishment system that balances criminality and the consequences that come with it is designed to make the galaxy more challenging for advanced players, more accessible for newer players, and more difficult for any Commander who likes to hunt weaker prey.

Elite Dangerous can be played Solo, with friends in a Private Group or in Open Play where the galaxy is massively multiplayer and friendly fire is always on — but we know the Open Play experience can be as daunting as it is exciting. We’ve heard your feedback and implemented a series of changes that will make life difficult for criminals who prey on new players. We’re introducing “hot ships” to increase the consequences for seasoned lawbreakers, and we’re deploying a new Advanced Tactical Response unit to hunt for repeat offenders. 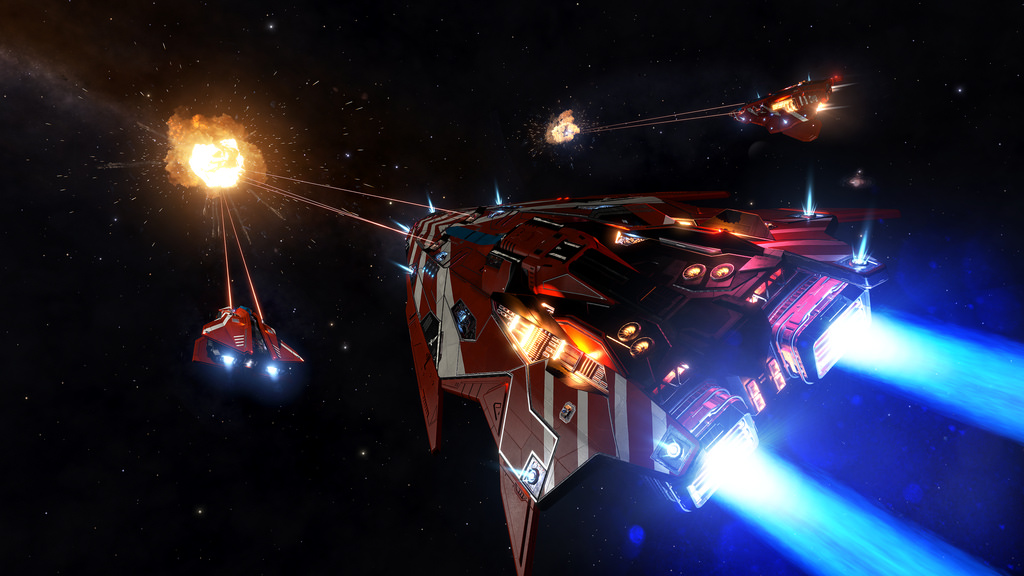 We’ve also rebalanced the bounty system and added levels of notoriety to create a fairer PvP environment in the open galaxy. We think Open Play is the most exciting way to play Elite Dangerous, but we want to make it a fairer place to play, too.

2.) A choice of mission rewards.

In Chapter One we’ll also be making changes to the mission reward system to give players more freedom and more tools to accomplish their goals. The new system will allow players to choose between three different sets of reward packages all of roughly equivalent value at the end of every mission. It’s another way we’re making the Elite Dangerous galaxy a place where you can really play your own way. 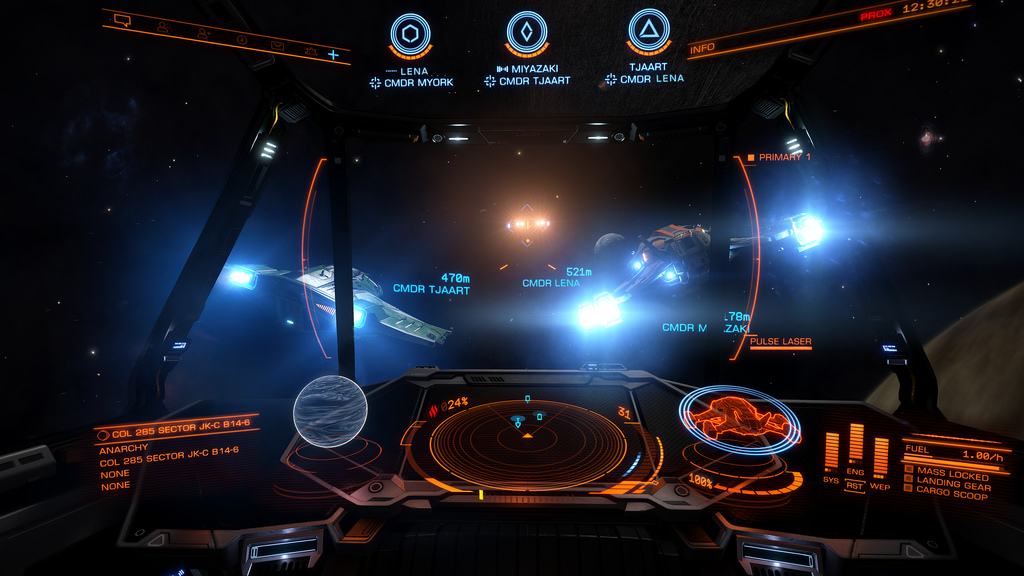 But the new Trade Data isn’t a “win button” for traders. You’ll have to explore the galaxy and add systems to your database before the info is accessible. The more systems you visit the greater the amount of trade data available when you’re looking to make some credits for that new ship, armor plate, or missile rack.

4.) Galnet Audio keeps you up to date.

The Elite Dangerous galaxy is full of news and weird events. GalNet — the main source about important events taking place in the Milky Way — gets an upgrade in Beyond — Chapter One, making it easily accessible right from your ship’s HUD with GalNet Audio. 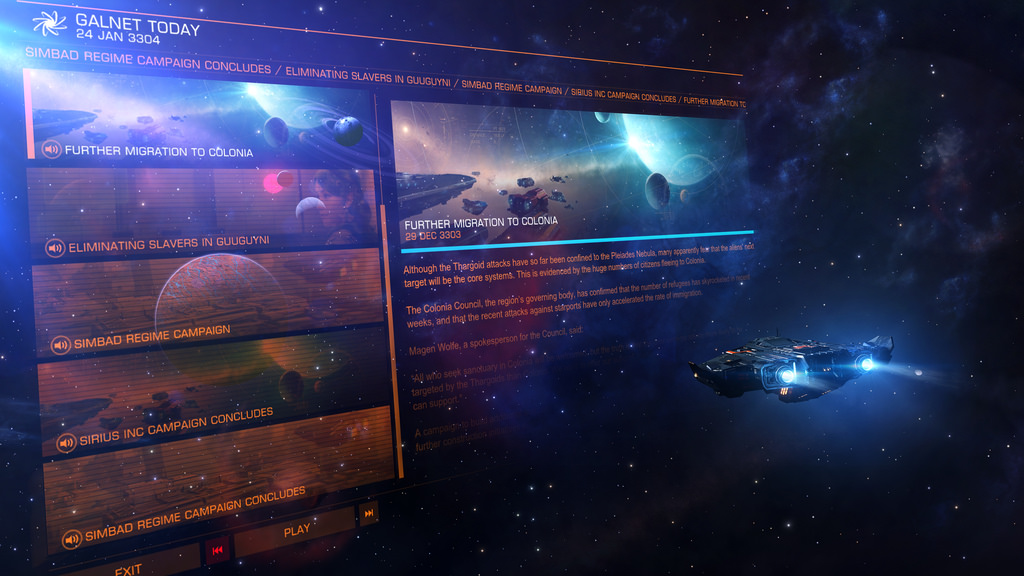 The galaxy’s news moves fast, and GalNet Audio gives players a chance to listen to the latest updates and ongoing narrative while traversing the galaxy. The story updates daily based on player activity, and we want to give you a better chance to impact it.

5.) The introduction of the Chieftain.

For Elite Dangerous Horizons owners, we’re introducing a new combat-focused ship: The Chieftain. This warship was created in response to the growing alien threat and is designed to bring heavy firepower to any alien encounter. Favoring weapons and maneuverability over armor means the Chieftain will be able to dish out a lot of damage but won’t be able to take much. It’s a fun ship to fly, but also a risky one!

And the Beyond series doesn’t end here! Chapter One opens the new season, The following two updates will see the introduction of new content, while the last Chapter of the year will once again bring major operational changes to core systems of Elite Dangerous. We’re especially excited to introduce Squadrons — a new way for Commanders to manage their player groups and take part in community goals together.

We’ve been listening to your feedback and we know Elite Dangerous wouldn’t be where it is today without you, so we’re thankful for your support and we hope you’ll join the players exploring, fighting, and trading across the Milky Way.