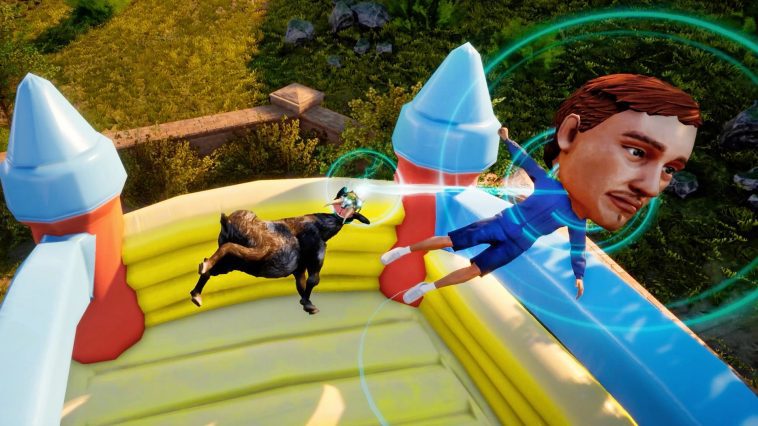 Someone left the gate open and Pilgor is free! So now the time has come for us humble developers to ask you nicely, please buy our game?

If you’re still on the fence about giving your hard earned money to a company who spent five years making a stupid game about goats, dont think about it – just wreck that fence and buy it.

However, if you’re really one of those people who still needs ‘reasons’ to buy this game, here’s five to hopefully get you bleating excited.

Who’d have guessed it?

Goat Simulator 3 is ultimately the only game series in existence that lets you live out your wildest goat-themed dreams.

Step into the hooves of our protagonist and resident catastrophe-causer Pilgor to headbutt, scoot, and crash your way across the huge new island of San Angora.

Roam the wilds of the map and complete events to discover and suit up in over 350 cosmetics from hoof to horn. While some of our cosmetics are just for looks, many have special stackable powers which you can then unleash on unsuspecting NPCs, other players, or inanimate objects (whatever floats your goat).

Honestly this is our game’s biggest selling point. We just really love goats and if you do too, then this is the game for you.

In the real world there are silly things like the laws of nature, real-life consequences, and property damage fines. In San Angora the world is yours to bend to your will – or push it until it breaks.

Mess around with status effects from fire and electricity to pig-secreted grease to cause chain reactions in your wake.

Certain collectibles will give you abilities with no limits. Want to make an NPC’s head as big as the moon? Or plant your own in-game forest? We’ve given you the tools to do so … who cares about frame rates anyway?

While you can experience Goat Simulator 3 alone, jokes are always better when shared with friends.

Goat Simulator 3 supports up to 4 player co-op either online or local and contains seven competitive mini-games to stress test the limits of your friendships.

“How do the mini-games work?” we hear you ask. We’ve designed areas of the map to show off each mini-games mechanics but once you’ve ‘found’ them in the world you and your friends can start them anywhere on the map seamlessly from the in-game menu.

Want to start a game of Hoofball in the city? You can! Some goal posts may end up atop a skyscraper but hey that’s all part of the fun right?

There are Secrets to Be Found…

We don’t want to spoil anything here, because we’re not monsters. But there’s more content in Goat Simulator 3 than you can well … shake a goat at. The world is brimming with things to see, puzzles to solve, and collectibles to find – all with surprising results.

There may also be a few nods to other famous films, games, and brands to spot, but we don’t want anyone to sue us or send a cease and desist … so shhhhh.

While technically you can muck around in the world of Goat Simulator 3 indefinitely, we’ve built Goat Towers around the map which track player’s progress. The more you do in Goat Simulator 3, such as finding collectibles or completing in-game events, the closer you get to unlocking the official ‘ending’. But that, my friends, is for you to find out for yourselves.

Oh no, we said that already didn’t we?

Fine then, here’s a further sneak peak at what you can expect inside the world of Goat Simulator 3. And if you need any more convincing, just know that everytime someone buys Goat Simulator 3, a Coffee Stain North developer gets paid (what else did you think was going to happen?). 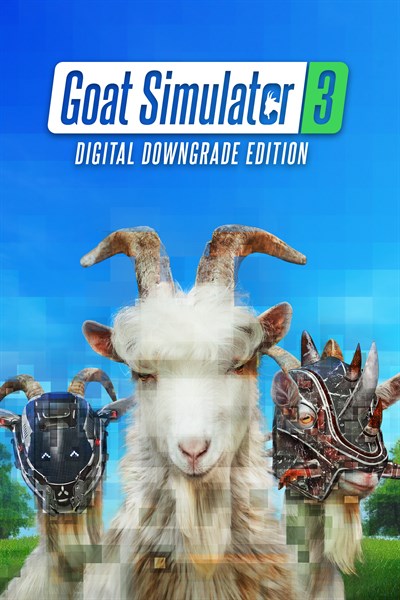 ☆☆☆☆☆4
★★★★★
Pilgor’s baaack! Gather your herd and venture forth into Goat Simulator 3; an all-new, totally realistic, sandbox farmyard experience. Invite up to three friends in local or online co-op, create carnage as a team, or compete in mini-games and then not be friends anymore. The Digital Downgrade Edition includes the base game, plus unique remastered garbage from Goat Simulator DLC throughout history, and a couple of spicy new additions: Remastered garbage:
– Play as Old school Pilgor
– Full Tank armour (MMO)
– Goat Zero skin (GoatZ)
– Space helmet & suit (Waste of Space)
– Masks of Don Pastrami, Valentino Salami, Dolph Spaghetti & Humphrey Ciabatta (Payday)
– Digital Soundtrack
– 3D Printing Files:
– Pilgor
– Tony Shark
– Goat Tower
– Trinket DISCLAIMER: Goat Simulator 3 is another completely stupid game. Will this game teach you how to become one with your local herd? Probably not. Learning about real goats with David Attenborough or something would absolutely be the smarter thing to do. 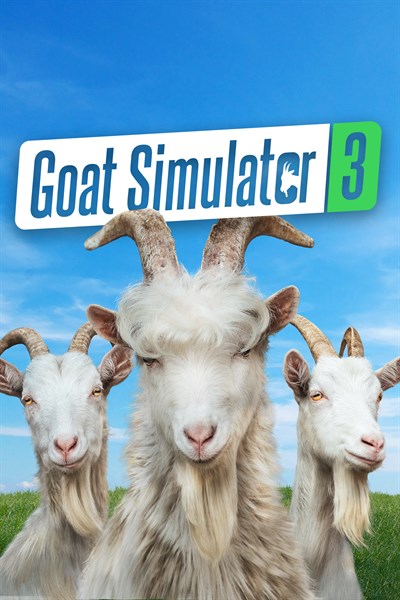 ☆☆☆☆☆38
★★★★★
Pilgor’s baaack! Gather your herd and venture forth into Goat Simulator 3; an all-new, totally realistic, sandbox farmyard experience that puts you back in the hooves of no one’s favourite female protagonist. That’s right – we’re doing this again. The baa has been raised, and Pilgor is joined by other goats too. You can invite up to three friends in local or online co-op, create carnage as a team, or compete in mini-games and then not be friends anymore. Get ready for another round of udder mayhem. Lick, headbutt, and ruin your way through a brand new open world in the biggest waste of your time since Goat Simulator! We won’t tell you how to play (except in the tutorial), but merely provide the means to be the goats of your dreams. KEY FEATURES: – You can be a goat
– Three of your friends can be goats too, and join you in local or online co-op
– No really, there are so many goats. If you want to be fancy you can wear the skins of tall goats, stripey goats, and many more. There’s a goat for everyone!
– Or dress up your goat in all kinds of nonsense, from toilet rolls to tea trays. Put on a jetpack for all we care
– This time we actually hired ‘game designers’ and we’re told they’ve added ‘an ok amount of content’; events, NPCs to mess with, physics, status effects, collectables, easter eggs, lies, betrayal, heartbreak
– They’ve added mini-games too, lots of mini-games (seven is a lot, right?) – Who said anything about a musical? – You can be Keanu Ree… (jk, wanted to check you were still reading)
– But you can be a goldfish (true story) DISCLAIMER: Goat Simulator 3 is another completely stupid game. Will this game teach you how to become one with your local herd? Probably not. Learning about real goats with David Attenborough or something would absolutely be the smarter thing to do.