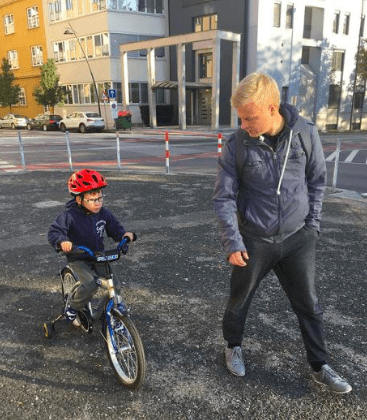 When Matej Vlašič was told that his son, Nik, who is afflicted with cerebral palsy, may never sit up, he began looking for a way to give him the best life possible regardless. With a little help from 3D printing and physical therapy, Nik cannot only sit up but also walk, cycle and dance. Vlašič has now set up aNImaKe, a company to help other parents in a similar situation.

Nik Vlašič was born prematurely with severe brain damage. His father, Matej Vlašič, was told his child may never be able to sit up. Three years later, Nik was diagnosed with cerebral palsy.

However, Vlašič decided to do everything he could to provide as high a quality of life as possible for his son. He started by spending months researching how he could help Nik and found a possible answer could be lots of physical therapy and ankle foot orthoses (AFO).

The AFOs would support Nik’s weight, align his feet and condition his joints. By the time he was six, he was old enough to try them out. However, AFOs are both very expensive, take a long time to make (from fittings to fabrication) and are uncomfortable.

So, Vlašič, who is an engineer with 12 years of experience, turned to 3D printing to create a much cheaper, more comfortable solution. By using a Formlabs Form 2 SLA printer, Vlašič created 13 prototypes of comfortable AFOs.

“The lack of comfort and high price combined with all the other cons were enough that I decided to do something about it… I didn’t have the solution at that time, but I wanted to find a better way to design it. I was just trying to help my son the best possible way,” explains Vlašič.

Nik went from a Grave Prediction to Dancing with his Family

It took Vlašič half a year to perfect the AFO design and the workflow of using a Formlabs Form 2 SLA printer. However, after this time, he was able to provide Nik with orthoses which were comfortable. With this support, Nik was walking within a few days. After a few months, he was dancing.

The AFOs designed by Vlašič fit comfortably into Nik’s shoes and one pair costs less than $15. Traditionally made AFOs cost upwards of $5,000. By comparison, Vlašič’s 3D printer cost just $3,500 and Durable resin costs $175.

Vlašič did a great job in helping his son to walk, dance and even hike. So, he decided to try and help others by starting his own company, aNImaKe, to provide more families in a similar situation as himself with the technology to help their children.

Rather than having to go through the discomfort of fittings, plaster casts and quickly outgrowing expensive AFOs, it’s possible to 3D print comfortable designs. Nik, now seven-years-old, is already on his fourth pair of AFOs.

Vlašič has also been working with Gaurav Manchanda, the director of healthcare at Formlabs, whose three-year-old son was also born prematurely and diagnosed with cerebral palsy.

The two have since been working closely to tackle the issue of expensive orthotics. Manchanda explains: “Even if my son doesn’t improve from this process, we can still help millions of people around the world if this technology can scale. If we play a part in that, it’s super fulfilling.”

License: The text of „Father 3D Prints Orthoses for his Son, Now Helps Others“ by All3DP is licensed under a Creative Commons Attribution 4.0 International License.