It always feels weird to put a game out into the world, but this time it’s especially surreal. What started as a dumb joke between my cousin and I while walking through a cemetery has somehow birthed a sprawling fantasy adventure about a pub crawl with demons, and it’s only a few weeks away! We’re dropping Afterparty on October 29, available on Xbox One and with Xbox Game Pass for Console and Xbox Game Pass Ultimate, just in time for Halloween.

A quick recap in case you haven’t heard about our game: In Afterparty, you play as two recently deceased best friends, Milo and Lola, about to be “processed” for an eternity in Hell. But they learn of a nigh impossible technicality: anybody who can outdrink Satan is granted re-entry to Earth. Time to pub-crawl through Hell.

I can’t think of too many games like it, but if I had to compare Afterparty to other media, I’d say it’s got elements of “Bill & Ted,” “Beetlejuice,” and “Rick and Morty.” But truly it’s its own ridiculous world, and every player’s experience will be different. 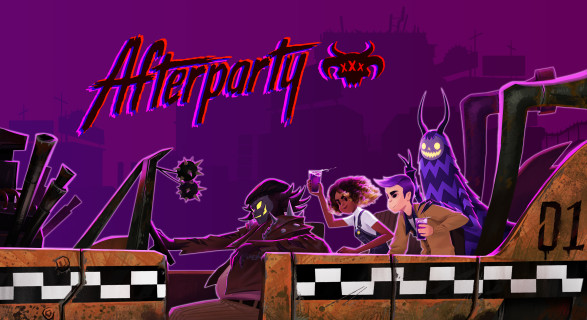 I’m hyped about bringing our next project to Xbox, and Xbox Game Pass in particular, as the service has been a huge shift for how players find, play, and get lost in Night School Studio’s games. With Afterparty, we’ve created something that feels like kicking back for the weekend and starring in your own binge-able adult animated show like “Rick and Morty,” which makes it a perfect fit for the service.

As a team who cares about making something uniquely “us,” with a super-specific voice, so much of the challenge for our crew is making sure we can find our audience. But it was truly eye opening when we made our last game, Oxenfree, available with Xbox Game Pass, because a whole new audience found us. At Night School Studio, our mission is to make games that let you control a narrative in ways that you haven’t seen anywhere else. For our debut, Oxenfree, we created a dialogue and movement system that ensured you never had to watch a cut-scene. Everything that the lead character, Alex, said or did was an extension of the player in real time. In Afterparty, we’ve pumped that system full of new possibilities.

You’ll control two characters, Milo and Lola, for a reason. We want to explore not only the upside of long-term friendship, but the pitfalls of knowing too much about each other. The game will pay close attention to how you shape *your* Milo and Lola; who you relate to more, whose plans you follow through with, and ultimately how you navigate the benefits and compromises of their friendship. By the end of the game, their relationship will be completely formed by your choices, and subsequent playthroughs will yield wildly different results. 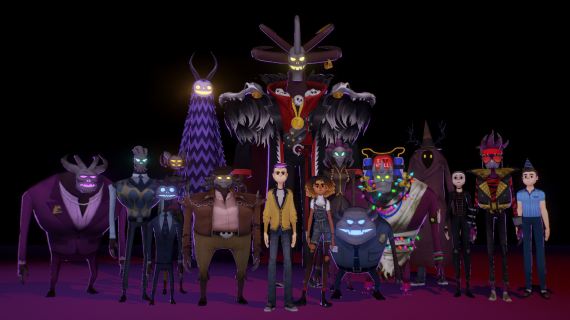 Whereas our last game, Oxenfree, had a unifying dilemma that the whole cast was trying to overcome, the situations in Afterparty reflect a much larger cast with their own unique problems. Filling the game with all these characters and stories meant we had to design the narrative more like a season of a show.

Every bar or street corner can lead to another set of strange characters who can help Milo and Lola on their greater journey, and the order in which you take on the story will have a huge impact later in the game. Don’t give your number to a demon if you don’t want them texting you later that night, or maybe they can come help you when your luck’s running out?

As communication is a central ability for Milo and Lola, we’ve created a system to let you customize how your characters might speak – booze. There are over 30 hellish-themed drinks to pound throughout the game, each providing a different type of personality boost.

Think of it like equipping a weapon, but for your words… every bar has a few different drinks that, once imbibed, give extra dialogue choices. Want to talk like a raging psycho? Order a Global Extinction. Fancy some vaudevillian flair? Grab a Great Exhibitionist. Don’t even ask what a Jeffery Bomber does. 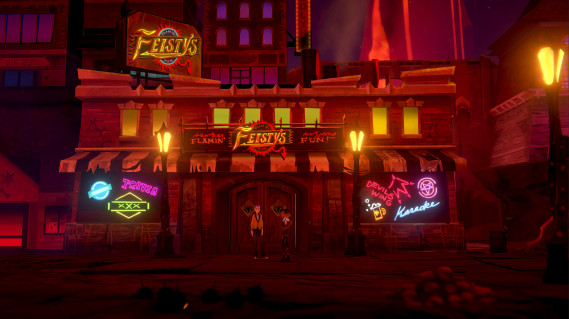 Hell’s bars are also full of activities. It wouldn’t be a night on the town if you didn’t get a chance to compete in games against the weirdos you meet. Beer pong, dance-offs, and shot stacking competitions will pop up when you least expect them, and they aren’t just sectioned-off minigames. These pub activities are interwoven with the game’s dialogue system, so you can trash talk, push the story in new directions, and branch the narrative based on not only your words but your actions. 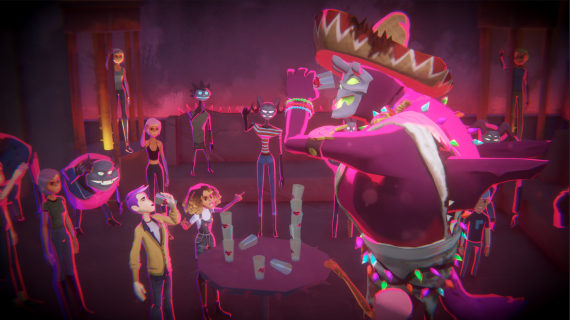 By the end of the night, you’ll have created your own story arc for Milo and Lola. Will they escape Hell? Do they even want to escape if they’re having fun?

We can’t wait for you to explore our vision of Hell, dive bars, multi-story dance clubs and all, when it launches on Xbox One and with Xbox Game Pass for Console and Xbox Game Pass Ultimate, on October 29.

Related:
Next Week on Xbox: New Games for September 24 to 27
Vehicle-Building Sandbox Racer Trailmakers Available Now on Xbox One
It’s Time to Choose Your Side in Narcos: Rise of the Cartels, Coming to Xbox One Later This Year