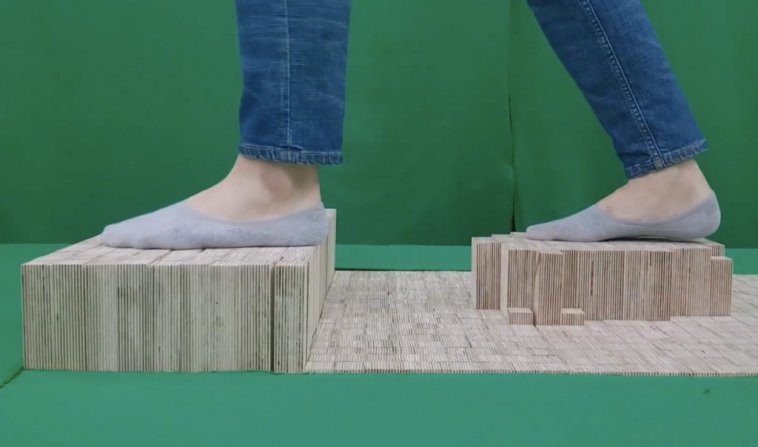 Virtual reality technology has come a long way in the last decade, but there are still some major things that could be done to make it even more interactive and immersive. For one, what if VR users could actually feel the ground they walk on rather than simply see it? A team of students from KAIST in South Korea and the University of Chicago set out to tackle this by creating a fairly large 1.8 by 0.6 meter platform that can accurately create the feeling of varied terrain. Called the Elevate, this device uses a total of 1,200 pins that can individually raise and lower with 15mm of resolution.

Each pin is comprised of a block of wood that protrudes from the platform, a comb-shaped section that is used to move the pin, and a locking bar to prevent unintended movement. At the core of the device is the shape generator, and its job is to individually actuate each pin. This is accomplished by moving row-by-row across the 60 rows to push or pull all of the pins within it via a timing belt and DC motor. There are 10 actuator modules in total that each contain an Arduino Nano, a regulator, two geared DC motors, a hall effect sensor, and a pair of magnets. The locking mechanism is controlled with an Arduino Uno and two servo drivers, and horizontal movements are done with an Uno as well and two microstepper controllers.

The resulting terrain is quite spectacular, as this much granularity means really fine details can be replicated. When paired with the VR game, participants who were testing the device consistently rated their experience on the Elevate to be far better than simply playing in VR.

To learn more about this project, check out the video below and the team’s paper here.