Would you like to journey to an exotic planet, meet cute little owl-like aliens and… slap them? In Journey to the Savage Planet, the first title from the new Typhoon Studios, you’re an intrepid adventurer in the employ of Kindred Aerospace, which proudly proclaims its ranking as the fourth-best interstellar exploration company for eight years running. That’s your first hint that this voyage might not be the best-advised trip.

The intentionally ironic title is something of a misdirect from a gameplay experience that is a bit like No Man’s Sky with jokes. (The color scheme of this game powers at least half of the No Man’s Sky comparison.) This looks like a pleasant trip to outer space where, sure, you could complete objectives, gather materials, and repair your ship — or you can wander around like a guest at the best botanical garden in the galaxy, slapping aliens. Which do you think I did?

Alien Fruit: It’s Good for You!

The E3 demo dropped me on the planet AR-Y 26, a relatively inviting place full of edible plants that totally didn’t alter my body chemistry (they did) and flying purple octopus-like creatures that were very happy to see me. (They weren’t.) There’s even a tall plant with blobby nodules that wave in the breeze and exude a hallucinogenic gas, and that stuff is nice. 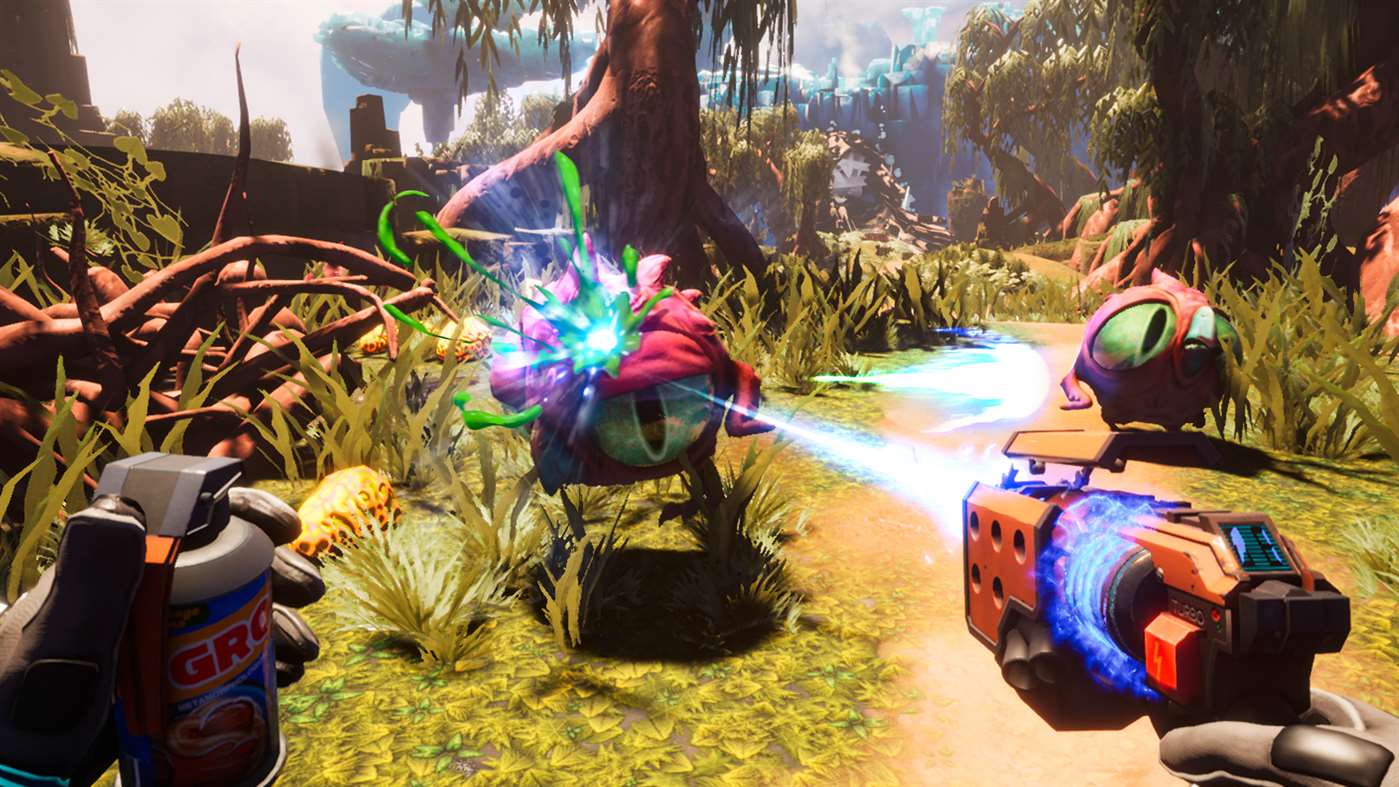 Journey to the Savage Planet puts a blaster in your hand, with the option to upgrade it after collecting planetary resources. The easiest way to collect elements required for crafting — which will also allow you to 3D-print gear like a grapple, to open new pathways along the planet — is by shooting the local fauna. Some of these creatures will literally run screaming from you (they’ve got the right idea) while others, like the savage lizard-type thing I encountered mid-way through the demo, are aggressive and genuinely dangerous. But this isn’t really a shooter. You’re more scientist and cartographer than solider, that that you’re necessarily going to be any good at those jobs.

Complete These Objectives (Or Just Hang Out)

You might have a couple of primary and secondary objectives active at any given time (one of which will be to recover your dropped resources after death) but much of the idea of this game is pure exploration, and having fun on the planet’s surface. Typhoon reps said the game is designed to be humorous and optimistic, and those ideas are put into play, in part, through scanning mechanics that allow you to catalogue the planet’s flora and fauna.

And, yeah, there’s the “slap” mechanic, which allows both a quick corrective smack via a press of X, or a fully wound-up backhand (by holding X) which can splatter some of the smaller creatures into green goo. Pull LT for a “down the sights” view and you’ll deliver a kick, sending some of the aliens flying like sentient kickballs — if there’s not some objective that uses this mechanic to complete an objective or two, we’ll have words with Typhoon. 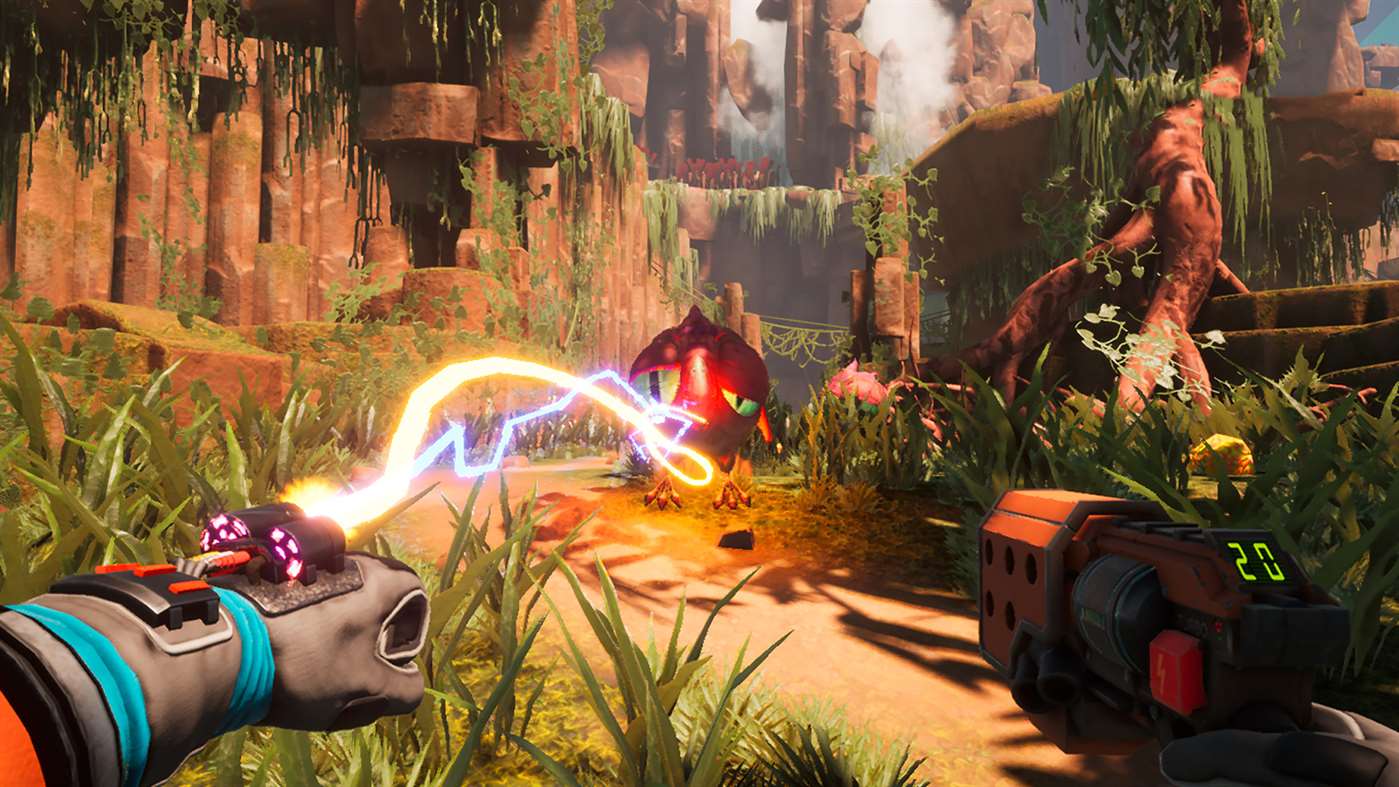 All that said, Typhoon explicitly made Journey to the Savage Planet as a “completable” game, clocking in at around 12 hours if you actually do as the game suggests and complete all the objectives in order. (Why would you do that?) There’s a tower off in the distance that begs investigation, and you might want to see if the planet is fit for human life. But don’t rush to any of it. This is not an epic, but a jaunt.

If some of the alien creatures don’t kill you, a fall from some precipitous height surely will. Fortunately, your ship’s AI will helpfully mention that you can be resurrected at least 49 more times before your body shows any sign of degradation. That seems like a joke, not a hard and fast proclamation that you’ve got 50 lives.

The tone is irreverent throughout — which you’ll know if you’ve seen the teaser, with a flatulent little alien and your explorer running about like a Looney Tunes character — and that gives this Journey a buoyant personality that isn’t quite like those serious space shooters.

Journey to the Savage Planet arrives in early 2020 for Xbox One and Windows 10 PCs.