Thanks to a development history that includes titles like Pillars of Eternity and Neverwinter Nights 2, a new game from Obsidian Entertainment is automatically an event. Specifically, when it looks like it might be a continuation of the designs seen in Obsidian’s Fallout New Vegas, which set a high standard for the Fallout series back in 2010.

The Outer Worlds, a first-person RPG with a rich vein of dark comedy, developed by Obsidian and published by Private Division looks like the spirit of New Vegas reincarnated into a new body. That’s not meant to make the game sound derivative; rather it looks like exactly the sort of title I’d hope to see from Obsidian.

At E3 2019, The Outer Worlds was not playable, but developers walked us through a 20-minute section of the game to introduce some of the key mechanics.

Let’s get it out of the way: Since Obsidian developed Fallout: New Vegas, and The Outer Worlds directors Tim Cain and Leonard Boyarsky created Fallout in the first place, there are big expectations that this game is essentially a spiritual continuation of Obsidian’s work on New Vegas.

Indeed, that’s exactly how it seems. Player choice is highlighted as a primary ambition. This is a conversation-heavy RPG, and nearly all the dialogue trees I saw in the E3 demo featured skill checks — often there were multiple skill-based options. One conversation with a vengeful business owner (she’s annoyed about the price of food, and wants the guy who controls the market taken care of) there were options to charm, lie, intimidate and persuade, if you have points in the associated skills. You’ll see skill-based conversation options even if you haven’t put points into that skill, to be reminded of alternate paths.

And the player is suffering weird effects from the long period of cryosleep which brought them to this remote colony planet. The condition facilitates what Obsidian calls “tactical time dilation” — which is to say, VATS from Fallout. You can slow time during combat and apply weapon skills to make location-based damage possible. There are weapon mods, and companions who can help in combat, especially if you’ve put points into the Leadership skill. 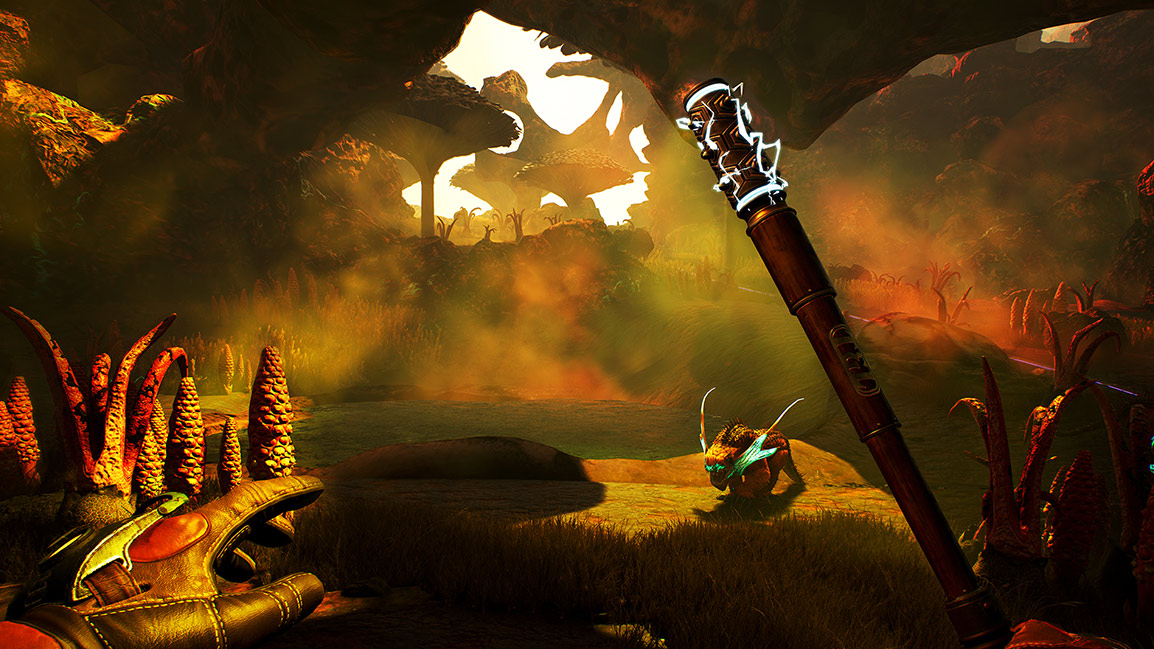 Not a Company Man

The Outer Worlds takes place on a set of moons and planets collectively called Halycon, a colony way out on the edge of the galaxy. The demo takes place on Monarch, where a terraforming experiment gone awry enhanced and mutated all the local flora and fauna instead of wiping them out. More specifically, it begins in a haven for smugglers and cutthroat entrepreneurs where “Deadwood’s” Al Swearengen would feel right at home.

The chief foodstuff drops from the cystipig, a scientifically created farm animal which drops bacon-flavored tumors. One man, Clive, has a monopoly on this disgusting but nutritious beast. He can be killed or bargained with; there’s even the option to attempt to broker a deal between Clive and the woman who wanted him gone in the first place.

The game’s trailer suggests that there’s a heavy anti-corporate story thread running through the game, but no details were in evidence in the demo. One, there was one bit: When sneaking into Clive’s factory, there was an option to hack into controls for the mechanical guards wandering about. One option was to activate Pink Slip Protocol, which turned out to be a routine where the robot guards “fired” all human workers by murdering them. It certainly cut down on the number of guards on the factory floor. 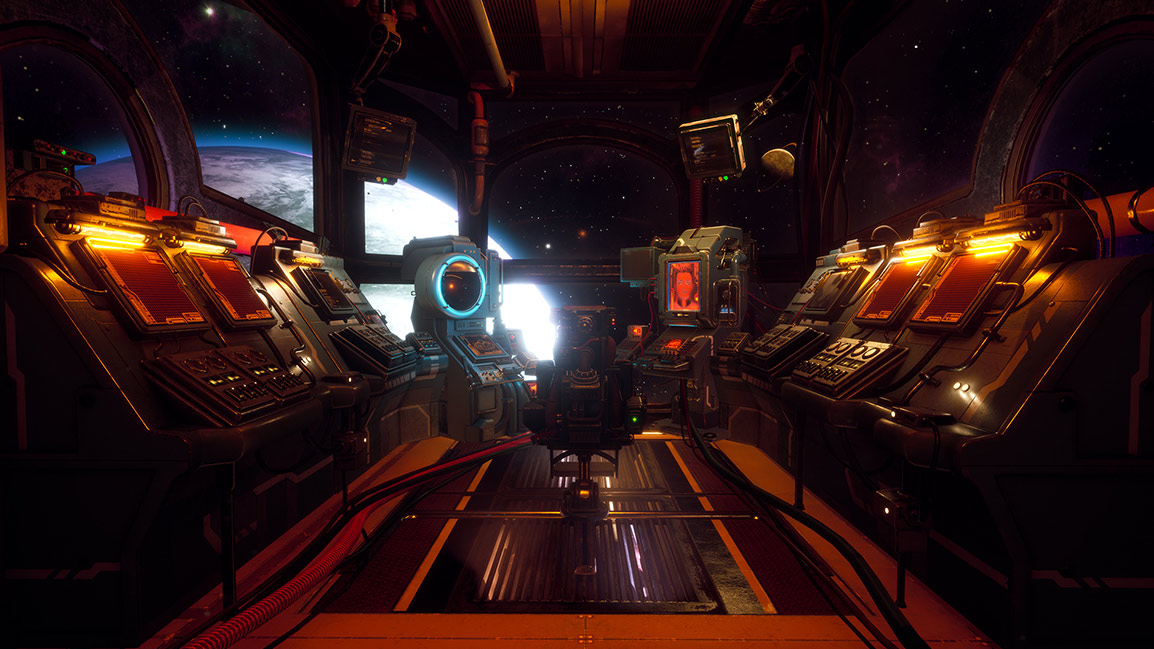 Speaking of sneaking, The Outer Worlds handles stealth in a unique way that features some great ideas. You don’t just crouch to become less visible. Instead, you put on a disguise, which must be assembled from collectible materials. Walk into a restricted area with the disguise and you won’t just get off easy. A meter drains, indicating how long you’ve got until being discovered — but even before that you might be challenged by curious guards. In that case it’s back to the skill-enabled dialogue options. Straight-up lying was one choice in an encounter we saw, where the player got around a curious robot guard by saying it was the first day on the job and their badge hadn’t been issued yet.

Our character was accompanied by two companions, who could influence the action in several ways. They chip in during combat, as one would expect, but they can also influence skill checks and even contribute some pretty significant bumps to some dialogue tree options, offering options you wouldn’t have on your own. And when you use a disguise, companions will automatically be disguised as well. 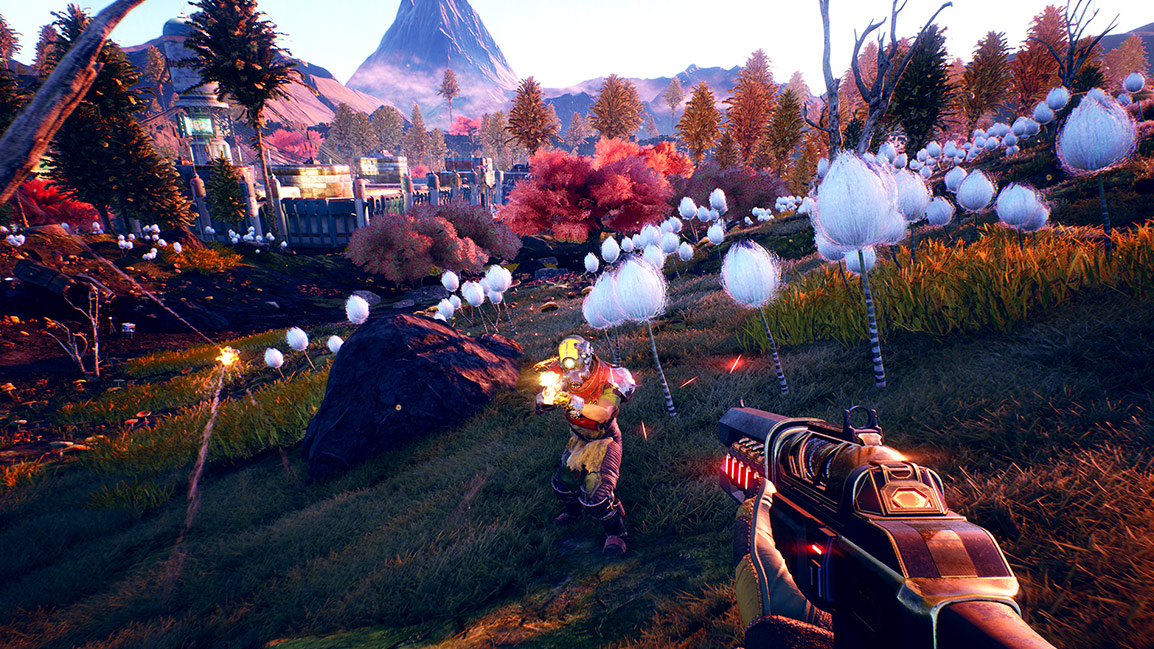 One interesting system gives players new flaws. That doesn’t sound great, but there’s a trade-off that might occasionally be worthwhile. The demo showed the player taking a lot of damage from mechanical sources, leading to a pop-up announcing a new flaw: Robophobia. If something is consistently incurring damage on you, that might trigger the flaw option. Accept the flaw and you’ll get a debuff or two (in the case I saw, it was something like -10% damage against mechanicals) but you’ll get a new perk as well. The flaw can also be declined, seemingly with no penalty. But if you’re looking for extra perks and think you can deal with a debuff or two, it might be a good trade.

The Outer Worlds probably won’t be as big as Fallout: New Vegas, but it certainly has the gameplay and sense of humor we’ve come to expect from Obsidian. New ideas like the flaw system are welcome additions to the company’s formula, and we’re looking forward to making some very questionable (in-game) choices when the title releases for Xbox One and Windows 10 PCs on October 25.

Related:
A Look at Ghost Face, Dead by Daylight’s Latest Addition is Available Now on Xbox One
A Parent’s Guide: The Best Xbox Game Pass Titles to Play With Your Kids this Summer
Coming Soon to Xbox Game Pass: Resident Evil: Revelations, Goat Simulator, and More