The undead apocalypse intensifies with the first major updates for Outbreak: Endless Nightmares available now on Xbox Series X|S and Xbox One! Return to the world of retro survival horror as you battle through semi-procedurally generated nightmares using the brand-new precision aiming modes with freelook, overhauled FPS view, and more based entirely on community feedback! Everything from game balancing to load times, framerate, and more has been improved with numerous quality of life enhancements. Read on to learn about the massively successful launch of the game, these brand-new updates, and the roadmap for the title across the next year.

Outbreak: Endless Nightmares is the first title in the Outbreak series simultaneously targeting both Xbox Series X|S and Xbox One. Since launch, we’ve seen the Outbreak player base grow 8X+ compared to prior titles. We’ve also received a tremendous amount of fantastic player feedback that has directly driven improvements to the game This success has given us the opportunity to focus on non-stop updates to the title, as well as plan out an expansive roadmap for the year ahead!

It’s never been a better time to jump into Endless Nightmares! Precision aiming and freelook are the new default control scheme for over-the-shoulder and first-person shooter modes. Your survivor is now far nimbler, with strafing and the ability to target headshots at greater range for extreme damage. Weapon balancing has also greatly improved, with power weapons like shotguns dealing the explosive damage you’ve come to expect when slaying hordes of zombies. Gore has also been improved to be more realistic. Co-op mode has also received a significant overhaul and plays better than ever before!

Get close and personal in the overhauled first-person shooter view

Take the fight directly into the face of the undead in the improved first-person shooter mode. Now featuring a clear, beautifully animated view of your survivor’s body and their weapon, driven by the real-time physics system at work across the title. This view also greatly improves your weapon’s accuracy to allow you to challenge threats at longer ranges, while ensuring the controls feel responsive and tight. This was the most requested feature by the community and we’re thrilled to deliver it so quickly after launch! If you prefer, the “retro-style” OTS/FPS modes that originally launched with the title can be optionally enabled as well during gameplay.

New options have been added that allow you to select the game resolution (Xbox Series X only), graphics quality and v-sync options. On Xbox Series X, you can now select from four graphics modes: Performance (1080p), Quality (1080p w/ real-time shadows), Performance+ (Native 4K), and Quality+ (Native 4K w/ real-time shadows) to either prioritize framerate or graphics quality. On all platforms, we’ve also added discrete v-sync options to target 60fps, 30fps or unlock the framerate, in addition to nearly 3X faster loading times and 20% boosted framerate (varies by platform and game scene). Texture quality has also been boosted across parts of the title.

That’s just a few of the highlights about how Endless Nightmares continues to evolve since launch. But you’ll also see numerous improvements across all aspects of the game experience including tons of bug fixes. All of this is available now through the cumulative updates the title has been receiving since launch. It has never been a better time to jump back into the nightmare!

The apocalypse’s roadmap to ruin

In the coming year, you can expect two major expansions to Endless Nightmares to shuffle out from the shadows. In Susurrations of the Nexus (ETA Winter 2022), Lydia will be forced to revisit twisted-variations of her memories of the outbreak as conjured by the horrific ghouls. After that, Vivification of the Apocalypse (ETA Spring 2022) will continue her story after the events of Endless Nightmares as she ventures forward into the unknown. These expansions will feature new content and gameplay scenarios, plus a few twists you’re definitely not expecting!

Thank you to everyone who has supported the Outbreak series over the years. It’s been awesome to see Endless Nightmares set a new benchmark for success across the series and we’re excited for the year ahead! Best of luck surviving out there! 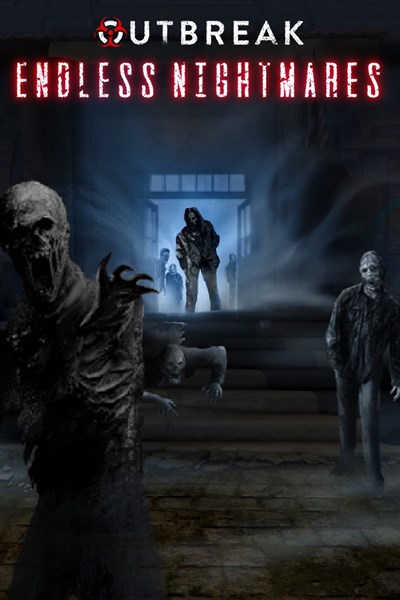 ☆☆☆☆☆ 11
★★★★★
$19.99
Get it now
Xbox One X Enhanced
Outbreak: Endless Nightmares twists the series' survival horror gameplay by adding elements of roguelike gameplay. You'll need to explore, hunt for supplies, uncover clues, and fight your way through each anomaly – each consisting of semi-procedurally generated instances where both the environment, and the undead, are out to kill you! Immediately after the events of Outbreak: The Nightmare Chronicles, you find yourself trapped within the remains of Arzt Memorial Hospital – the hub to organize your inventory and storage cache, level up your character, or just to take a breather before venturing back out into the chaos. There’s more to discover in the world besides murderous hordes of the undead – find the journals scattered about to learn more about the outbreak and ultimately where to find refuge! Don’t think death can save you – every time you die, you'll awake trapped in this nexus. Outbreak: Endless Nightmares focuses on extreme replayability by offering multiple character options – each with their own abilities, upgrade paths and more! Each time you venture into the anomaly, it’ll change and become increasingly difficult as you grow in power. You'll need to think carefully about what weapons, healing items, and other supplies you'll bring along. If you're lucky, you may find storage caches that give you access to your expanded inventory, and offer an opportunity to restock. But it's all on you to search your environment for supplies. If you run out … your fate is sealed!