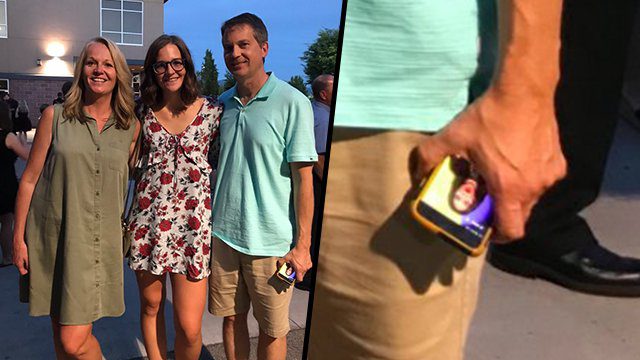 When it hits HQ Trivia time, the world freezes to endure 10-second bursts of intense, life-dependant pressure in the attempt to win $5,000 in exchange for their general knowledge.

It has become a time reference around which events are planned, but you can’t always plan for it, especially in the case of, say, your daughter’s high school graduation.

Wyatt Croy, from Oregon, found the most wonderful photos from his younger sister’s graduation where his dad was posing for photos while his hand held the ticket to his potential riches (in the form of the HQ trivia app).

We were at my little sister’s graduation, taking photos afterwards like normal and I did remember that HQ was going on while we were taking pictures, but I kind of assumed we were all just there to take the pictures and going to skip this round of the game in the middle of the graduation.

Once I got home, I was going through photos to send them out to my family, and then I noticed glowing by my dad’s hands in some of the photos. So I zoomed in and realised he was on HQ the whole time, which I thought was really funny and then I made that tweet.

I was really surprised at the reaction it got on Twitter. I tweeted in right before I went to bed, and when I woke up the retweets were in the 2,000s.

The game has a big following right now so it kind of makes sense that people liked it so much. I think people can really relate him trying to play no matter what’s going on.

I didn’t mention to him at first, but after it went viral I told him lots of people found the photo funny. At first he was a bit nervous that the whole world thought he was some terrible father, but soon he found it really funny and my whole family was laughing about it.

He didn’t say much about it, he just said ‘you know, it’s six o’clock, of course I’m going to do the quiz’.

Wyatt said he started playing HQ Trivia at college in California, and when he went home to visit he showed it to his whole family and by the time he went back again, they were all hooked.

Wyatt posted the photos to Twitter and it received over 369 retweets and 5.1k likes, with commenters commending his dad for having his ‘priorities straight’.

I was playing at the Taylor Swift concert on Friday in Chicago.. shout out to Verizon for the great reception throughout the game

College doesn’t pay for itself yo

It’s a very addictive game to be fair, if my kid’s graduation was at HQ time, it’d be an under the table job.