Brawlhalla and Street Fighter collide today in one of the free-to-play platform-fighter’s biggest crossovers yet. Ryu, Chun-Li, and Akuma are joining Brawlhalla’s cast as Epic Crossovers during a special event, and they’re bringing their best moves – including Ryu’s Hadoken and Chun-Li’s Spinning Bird Kick – to the battle. The event also adds a new game mode: Street Brawl, which adds health bars for one-on-one Street Fighter-style fights. Players can fight in a new map based on Suzaku Castle (Ryu’s classic stage), or get their hands on a Podium patterned after Kapukon Yu (E. Honda’s stage), as well as snagging a new Street Fighter-style K.O. Effect, an Emote based on Akuma’s Satsui no Hado victory pose, and avatars featuring Zangief, the Shadaloo emblem, a Hadoken, and an animated quarter-circle punch.

Of course, crossovers like this don’t just happen – they’re the result of careful planning and collaboration between companies, as well as deep affection and respect for a franchise that Brawlhalla’s developers grew up with. To find out more about how it all came together, we spoke with Josh Kenneth, international product manager at Brawlhalla developer Blue Mammoth Games.

How did this crossover begin? Was it something fans were clamoring for?

Josh Kenneth: Like every Crossover we do, it started because we love the property and its characters. For this one, we thought, “we grew up with Street Fighter, and it’s awesome. Can we do a Crossover with them?” Fans also have a lot of Crossovers that they want in Brawlhalla. It’s usually that person’s favorite IP x Brawlhalla, and we started seeing a lot of Street Fighter suggestions. Brawlhalla’s a fighting game, so it makes sense that fans would want us to crossover with another fighting game. It’s a great fit.

While Brawlhalla and Street Fighter are both fighting games, they have very different gameplay styles – Brawlhalla lets you take on multiple opponents at once and is more focused on free-form combat, whereas Street Fighter focuses on 1v1 matches and features set combos. Why does it make sense to bring them together?

Kenneth: This Brawlhalla x Street Fighter Crossover is our first Crossover with another fighting game. We’ve made leaps to crossovers with TV franchises, like Adventure Time, TMNT, and WWE, and to other video game genres, like Rayman, Shovel Knight, and Tomb Raider. So, while it makes fighting-game sense to bring them together, all the differences in the styles are also what makes it so fun. We were able to bridge a gap between traditional 2D fighters and platform fighters with this Crossover, and it’s awesome. 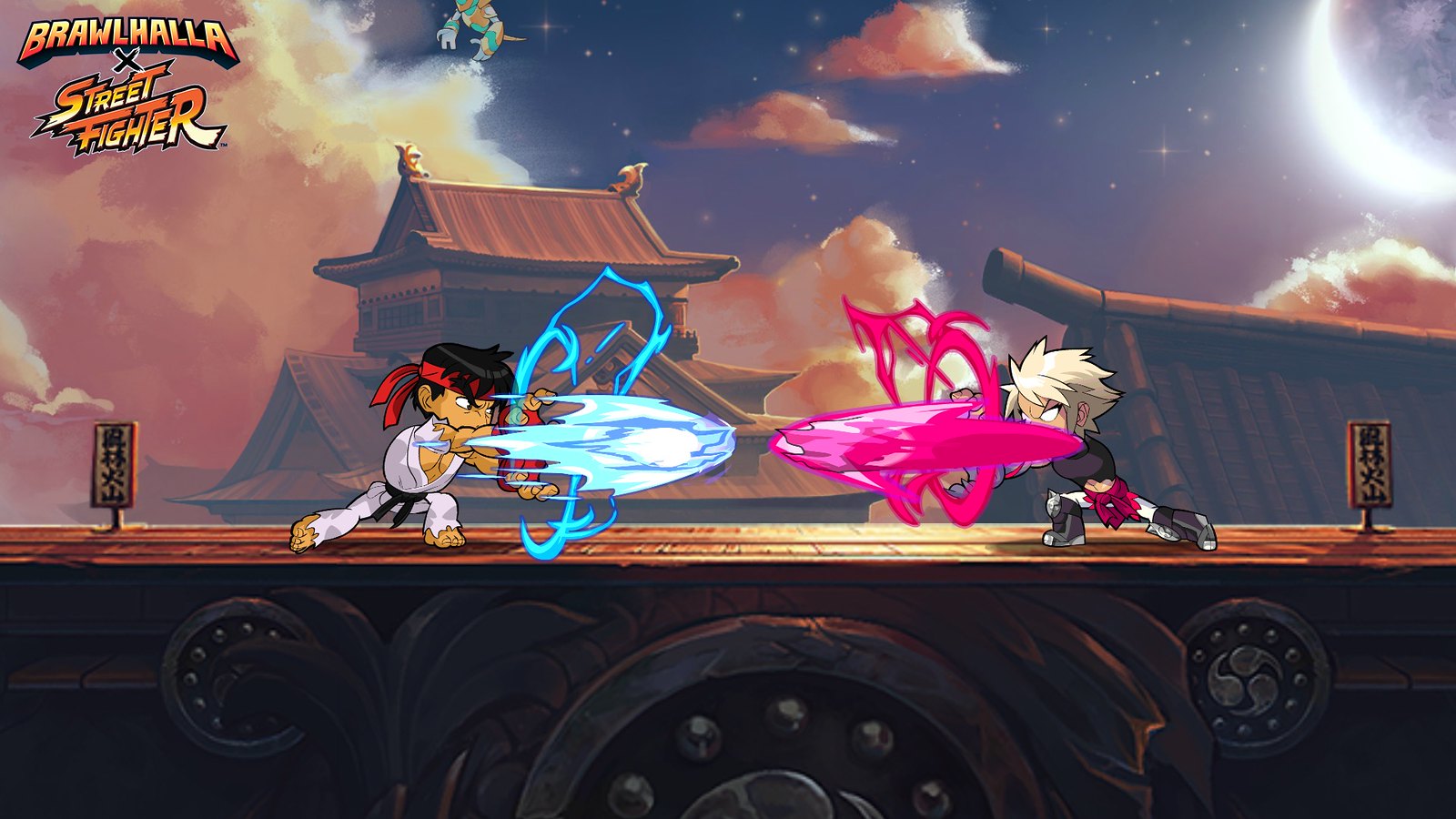 Epic Crossover for Petra
Ryu is always trying to find the next strongest opponent to better himself. Many of his iconic techniques have been brought over to Brawlhalla, like the Tatsumaki Senpukyaku, Shoryuken, and Hadoken.

Street Fighter characters have a familiar feel and fighting rhythms; what was it like adapting these characters to Brawlhalla? What made Petra, Wu Shang, and Val the right characters for these Epic Crossovers?

Kenneth: We knew we wanted to have the most iconic attacks for each character. For Ryu, for example, that meant the Hadoken, Tatsumaki Senpukyaku, and the Shoryuken. Petra, Wu Shang, and Val had all the right weapons and attack styles to fit these Street Fighter characters and their iconic attacks. Once we had those attacks in the game, everything just fell into place. It felt so right so quickly! Chun-Li has her Spinning Bird Kick, Akuma has his Zanku Hadoken – it’s all there.

In Brawlhalla, each character has two weapon types. What are the Street Fighter characters armed with?

Kenneth: Each of the two Weapons the character uses changes their fighting style, so we used this opportunity to split the iconic attacks up between the weapons. Ryu uses Gauntlets and Orb, with the Orb based on the fighter’s willpower (like a Hadoken). Chun-Li uses Spear and Gauntlets, so she uses her spear to balance while she kicks. Akuma uses Sword and Gauntlets, with the sword being based on his exclamations about obliteration and annihilation. Basically, he’s going to use this thing to annihilate everything, as he likes to do. 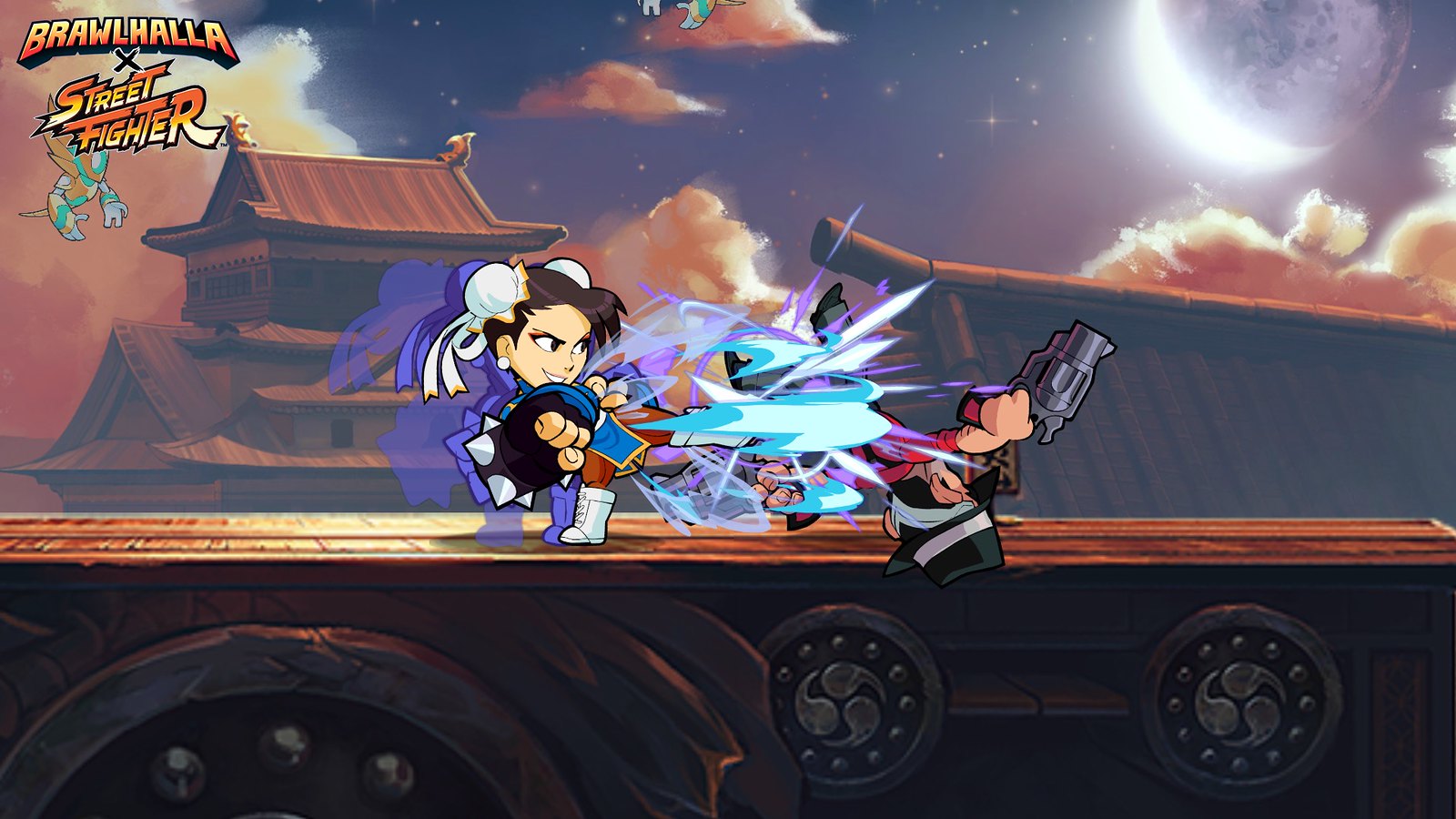 Epic Crossover for Wu Shang
The Strongest Woman in the World is sure to teach her opponents a thing or two about how to take a kick. She brings techniques of her own into Brawlhalla, like the Spinning Bird Kick and Kikosho.

What was the process like of working with Capcom for this crossover? Were they involved in tuning the characters, for example?

Kenneth: Capcom was awesome to work with. Their team had creative input and final decision-making on how the Street Fighter characters looked in Brawlhalla. We would bring our ideas and expertise on how Brawlhalla looks and works, and they would give ideas on what to fit in, and how it all looked. The whole lot of them were really nice and fun to collaborate with!

What can you tell us about the new Street Brawl mode?

Kenneth: Imagine taking the Legends, movement, and weapon system of Brawlhalla, then putting the rules of Street Fighter around it all. Health bars, best of three, small 1v1 – it is so much fun. There are also walls and a ceiling on the map to really bring the combat in close. I “tested” it a whole lot during development just to play it as much as I could; also to give feedback, of course, but any chance I could get to play it, I was taking that chance!

Ryu, Chun-Li, and Akuma are arguably the three most iconic characters in the Street Fighter franchise. Were any others on the table at one point? 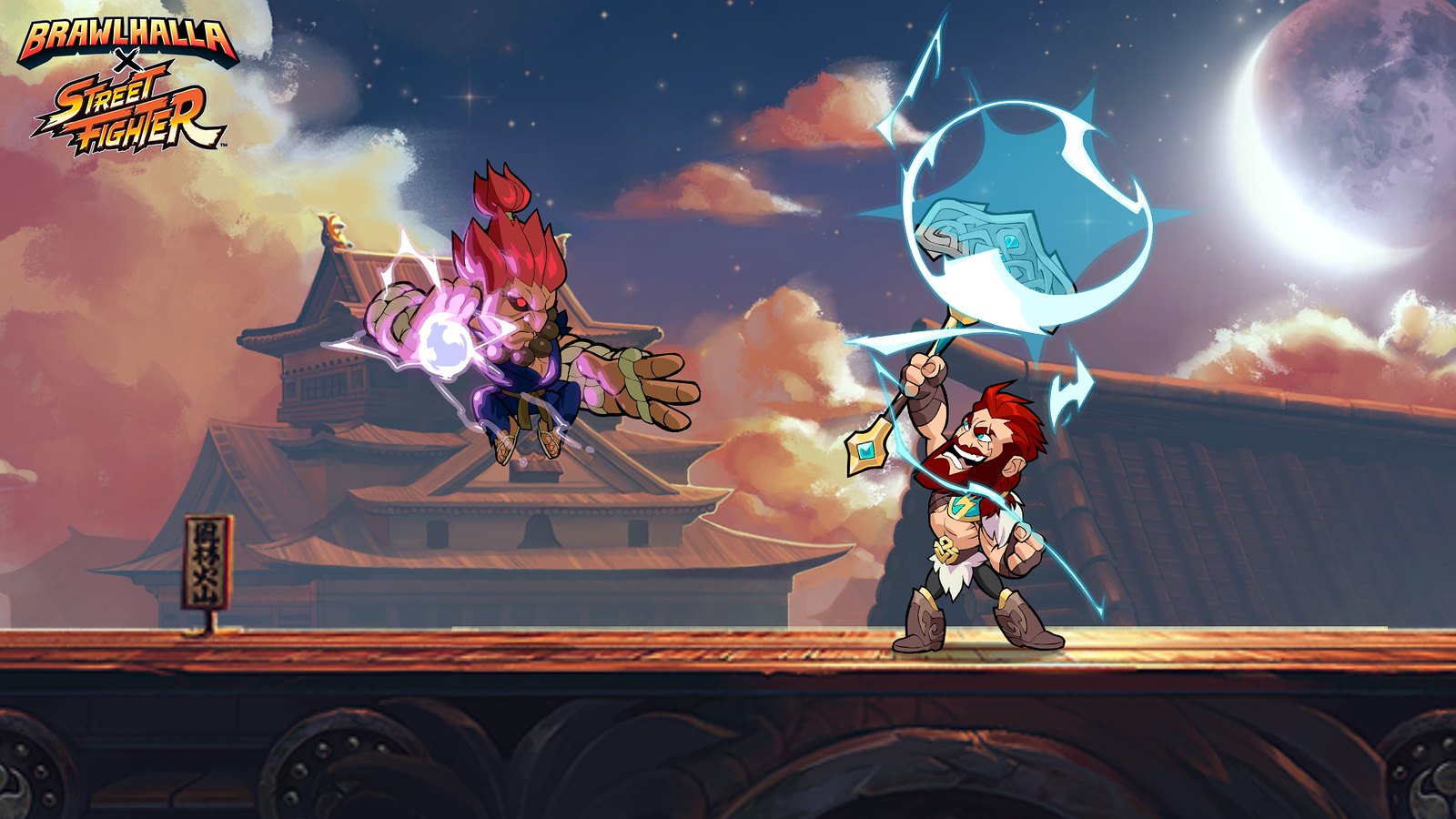 Epic Crossover for Val
Focused on defeating the gods, the Master of the Fist is ready to make them truly tremble to pieces. He’ll achieve ultimate power with his Tatsumaki Zankukyaku and Zanku Hadoken techniques, among a few others..

How does the art team translate characters into the Brawlhalla art style and still maintain their identity?

Kenneth: I can’t sing the praises of the Brawlhalla art team enough. Every single one of them is incredible. Since they are well-versed in the signature Brawlhalla art style and are always huge fans of the crossover characters we bring into the game, they have a great foundation to start from. That means they can identify the most important aspects of the characters’ designs and bring that into the Brawlhalla style. They also work closely with our partners, like Capcom, to make sure that everything translates over nicely, and that each character feels just right. Honestly, I’m certain the art team could fit any character to ever exist into Brawlhalla somehow.

What is it about Suzaku Castle that made it the clear choice for the map? Did you consider any other classic Street Fighter locations?

Street Brawl mode is available to play now in Brawlhalla on PlayStation 4 and PlayStation 5 (via backwards compatibility), and Ryu, Chun-Li, and Akuma are available for purchase as Epic Crossovers. All Street Fighter content will be purchasable and playable after the event ends.