Astroneer is a Co-op Space Sandbox Launching on PS4 This Fall | Blogdot.tv

Hello! Joe from System Era Softworks here to share some news about something that many of you have been asking for! Our first game, Astroneer, is coming to PS4 on November 15, and is available to pre-order right now! We couldn’t be more excited to join the amazing PS4 roster, and we’ve just released a trailer to celebrate!

Now that the announcement is official, we wanted to take a look back at the creative process behind one of the most recognizable things in Astroneer: our space suits! The creation of Astroneer suits is a multi-step process, combining not only the art and visual presentation, but also animation, to give them all distinct personalities like this:

For suit creation, we worked very closely with an amazing Concept Artist and 3D artist, Heather Penn. After the first four suits in the game were decided on, she was tasked with creating a new round of suits for each planet type in the game. She ran with that idea, and started to envision space suits for all the different environments that Astroneers might encounter on their travels. Heather put together this image of the overall workflow, starting from sketch to final in-game art:

Heather starts with sketches of variations to work out ideas quickly. After refining the sketches to the final version, she then moves to modeling a rough silhouette of the suit’s major features to make sure it works in 3D. Once that is done, she “paints over” the 3D shape, then models the final asset off of that.

Some of the earliest sketches we saw of the new suits were mood boards with rough silhouette drawings. These mood boards always included really interesting images to show the inspiration and themes for the suits. One of our favorites incorporated the famous “water bear” photos from a few years back. 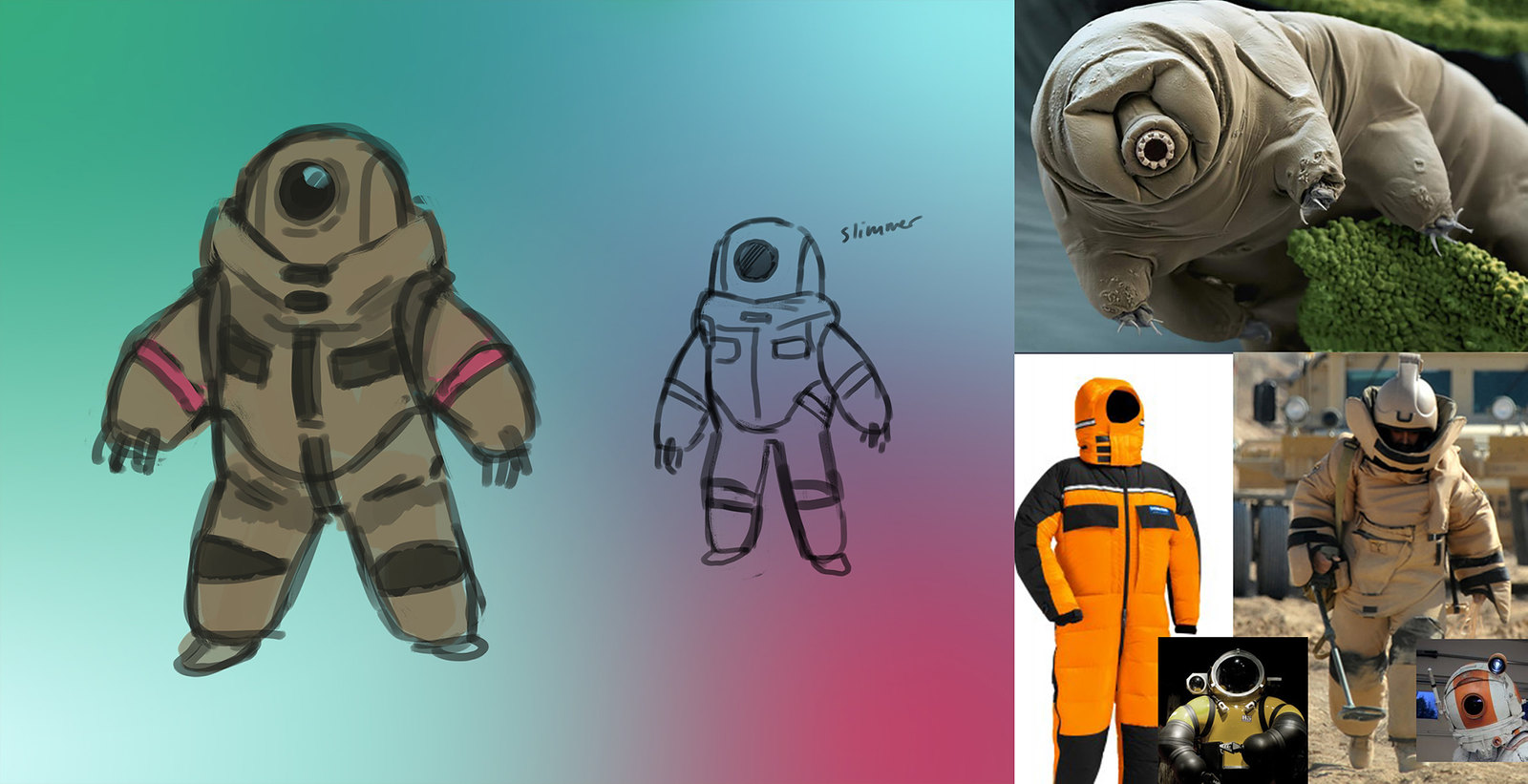 As you can see in the above photo, inspiration for Tundra suit came from microorganisms, diving suits, and military style safety armor, among other things. Here is another one, showing that the Arid suit’s design is heavily inspired by real life space suits and astronaut clothing: 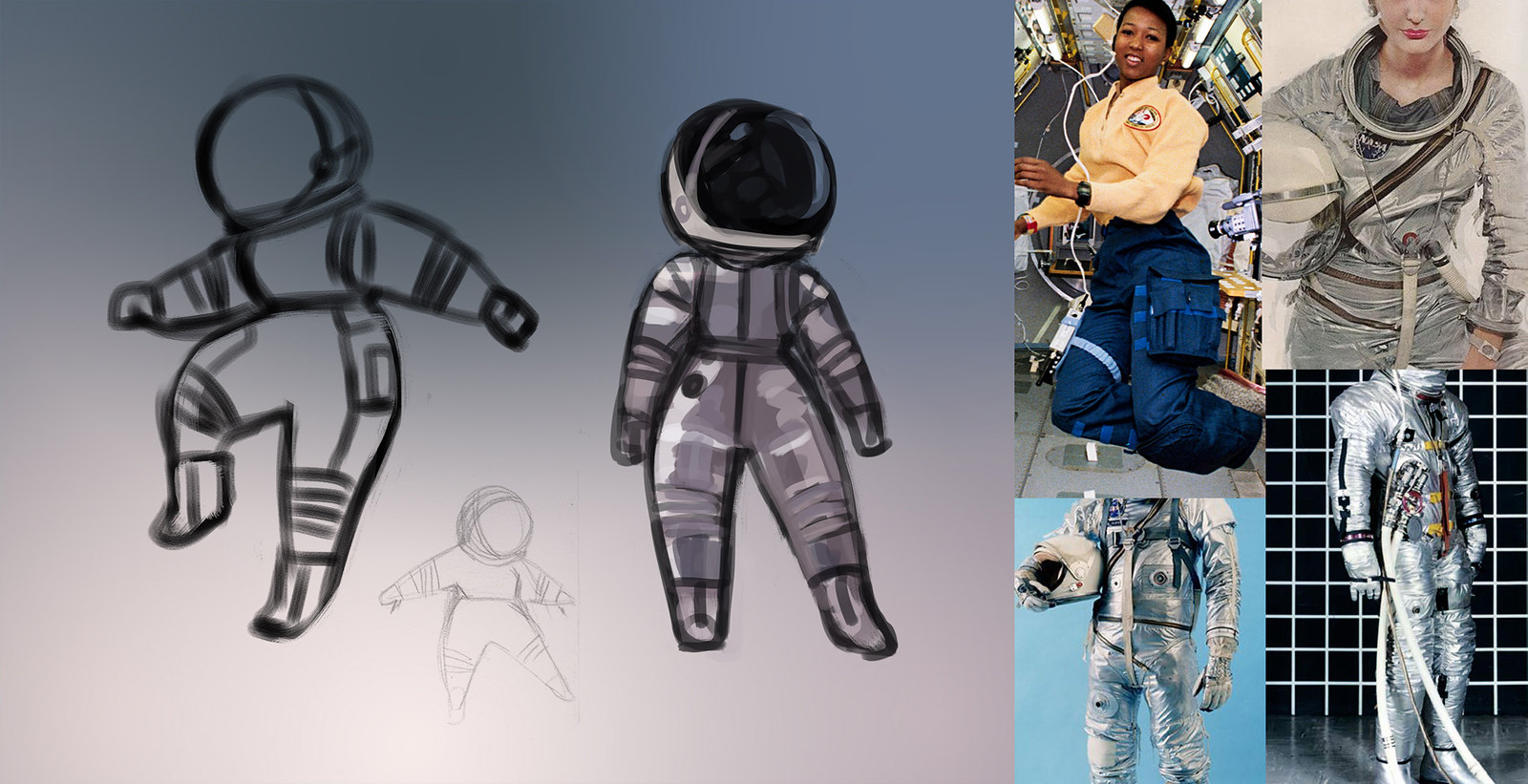 After a round of feedback and approval for the rough designs, the real fun began. Heather went to work modeling the suits in 3D from the concepts. She told us a little bit about that process:

“Because I am a concept artist and 3D artist, a lot of the magic happens when I actually convert it. I don’t have to get the (2D) designs perfect…Which is sort of freeing because in the translation from 2D to 3D, something always goes wrong.”

The best example of these happy accidents came during the modeling of the Exotic suit. The original sketches of it were super adorable and we loved them, but once they got to 3D, we realized something really important was missing: A head! 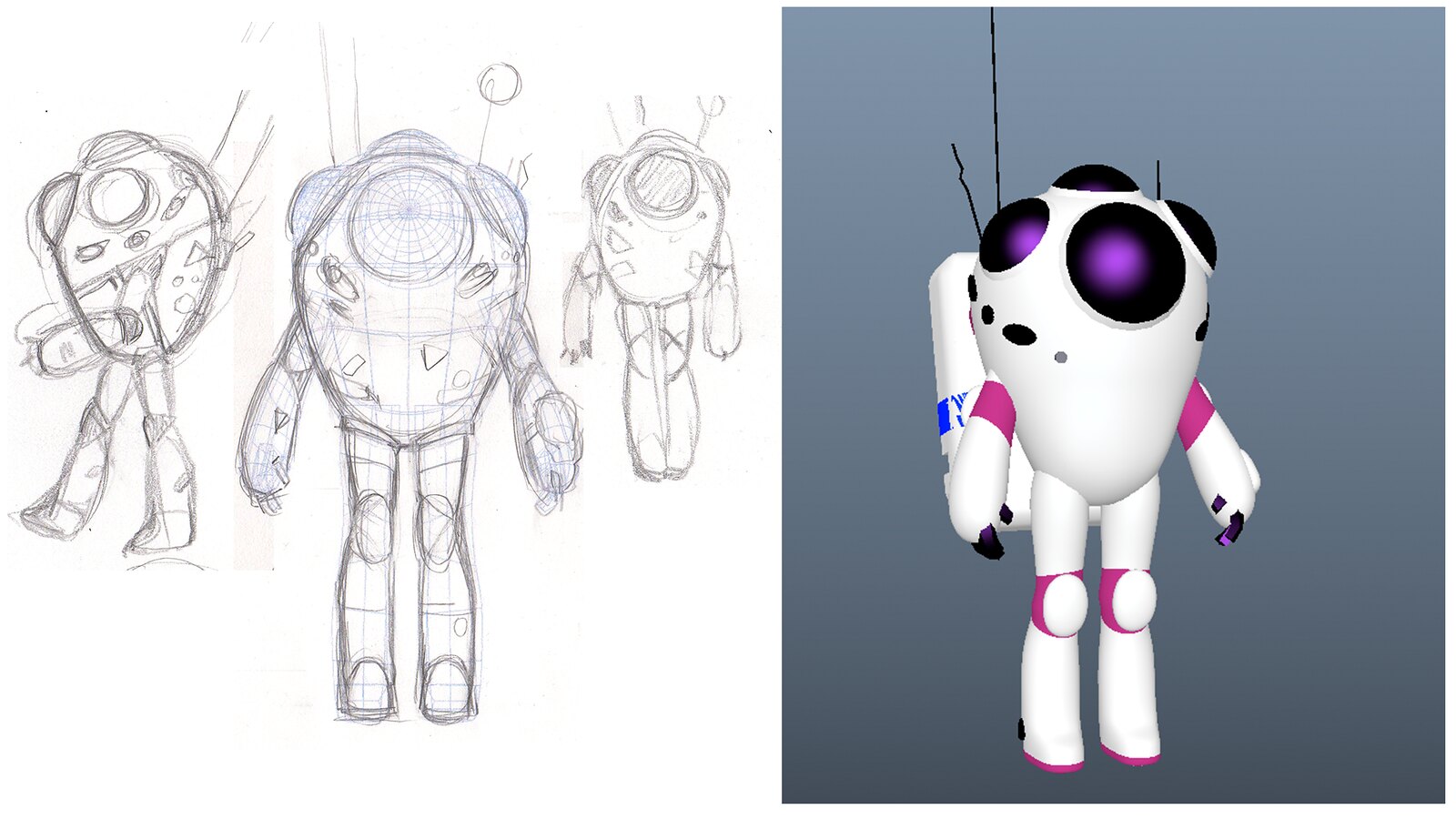 Astroneers need a head so they can move it around and shine their headlamp where they are looking when underground… and Exotic suit’s body was also its head. Heather then created an extremely scientific drawing to illustrate to the team how she would solve that problem: 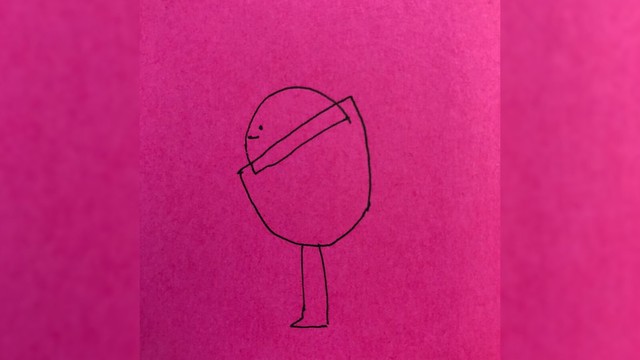 After we all nearly passed out from immense adorable-ness of this masterpiece, she separated out the “dome” of the suit to be a head that could spin around, and that actually added some really cool options for when animation came into play!

Animating a lot with a little

After the 3D models are finalized, Gene, our animator, takes over and creates an animation skeleton that fits with the suit’s body shape, and then sets out to create unique versions of all of the animations that suits need, like walks, runs, waves, dances, and so on.

Creating distinct and emotive Astroneer suits is actually a big challenge because you never see their faces, and none of them talk (besides the occasional muffled exclamation). But, right from the beginning of the process, Heather often told the team about the head canons she developed alongside the creation of the suits.

In a lot of cases, Gene, our animator, took that guidance and then gave each of the suits distinct body language to reinforce that unspoken personality. For example, Heather told us that she pictured Exotic suit to be a clumsy, pigeon-toed scientist, and if you look at the final animations, that inspiration is unmistakably there:

Gene is also instrumental when making the animations we use in our trailers like the PS4 announce trailer we posted recently. The team loves when we get the opportunity to use out-of-game content to build on the personalities of the Astroneer suits, while also giving players cool moments where they can see their favorite suits interacting with one another.

Thanks for reading! I hope that was a cool look at some of the fun behind the scenes work that goes into Astroneer. We can’t wait to bring Astroneer to PlayStation fans while continuing to develop it for years to come. The game is now available for pre-order, both digitally and physically!

See you in the stars.