Assassin’s Creed Valhalla is coming to Xbox One on November 17 letting you live the life of a Viking raider in 9th century England. Those who purchase the game on Xbox One can also upgrade to the Xbox Series X version at no extra cost using Smart Delivery.

Assassin’s Creed Valhalla follows the thrilling saga of Eivor, a fierce Viking raider, as they search for a new home for their people among the fractured kingdoms of 9th century England. Throughout the journey, you can raid valuable sites, recruit deadly raiders, upgrade your settlement, and assault massive, fortified strongholds.

Valhalla’s new combat system allows Eivor to dual-wield a large variety of weapons, while the new stun system lets you finish off enemies with all the ruthlessness you’d expect from a Viking raider. As Vikings aren’t overly welcome in England, a stealthy approach may be necessary at times. Thankfully, the return of the Hidden Blade lets you assassinate your targets quickly and quietly.

England’s Dark Ages are a time of war and conflict, and if you’re going to survive, you’ll need to build relationships with those around you. Every choice you make, from political alliances to deciding who lives and who dies, will impact your saga.

In addition to the Standard Edition, the Gold, Ultimate editions of Assassin’s Creed Valhalla are available to pre-order now on the Microsoft Store. Pre-ordering any version on Xbox One or Xbox Series X will get you an additional mission, The Way of the Berserker, at launch.

Sharpen your axes and ready your raiding party for Assassin’s Creed Valhallaon November 17. 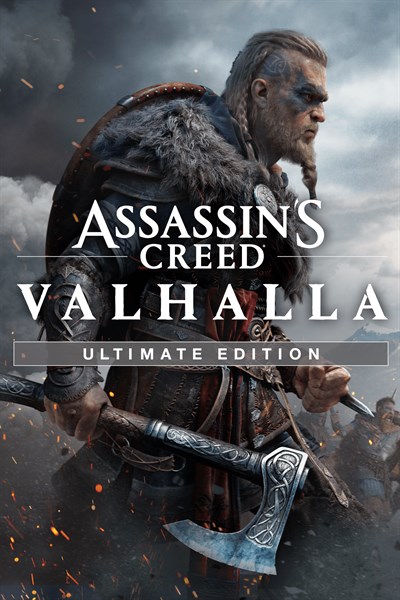 ☆☆☆☆☆
★★★★★
$119.99
Pre-order
Kingdoms leverages the Smart Delivery technology – buy the game once and play it on either Xbox One or Xbox Series X when both the console and that version of Kingdoms are available Includes the game, Season Pass, and Ultimate Pack. Pre-order now for access to the bonus mission The Way of the Berserker. Become Eivor, a legendary Viking raider on a quest for glory. Explore England's Dark Ages as you raid your enemies, grow your settlement, and build your political power. – Lead epic Viking raids against Saxon fortresses throughout England. – Dual-wield powerful weapons and relive the visceral fighting style of the Vikings. – Challenge yourself with the most varied collection of enemies ever found in Assassin's Creed. – Shape the growth of your character with every choice you make and carve your path to glory. – Explore a Dark Age open world, from the harsh shores of Norway to the beautiful kingdoms of England.