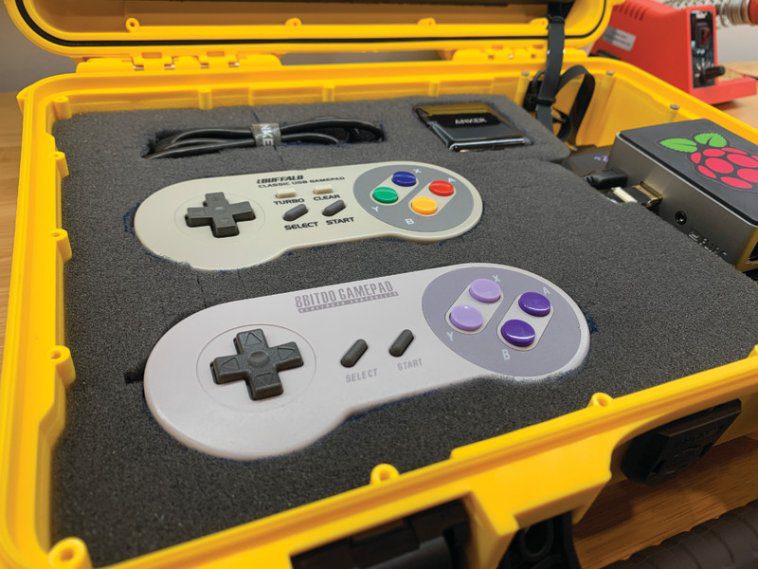 When pondering his next project with a Raspberry Pi, he decided to create AdventurePi, a portable gaming device that would be as robust as an arcade machine.

“A lot of people my age move around a lot or live in apartments and no one really wants to lug around a free-standing cabinet, so I looked to create a device that would feature full arcade controls.”

In fact, Zach ended up creating two different versions of his project. As well as an Arcade Edition that features a removable panel containing arcade buttons and a removable joystick, he produced a Console Edition that uses a foam block insert with cutouts for controllers and accessories.

“My primary goal was to make the project as accessible as possible and introduce more people to Raspberry Pi, hobby electronics, and retro gaming,” he says, opting early on to use the RetroPie OS which allows games originally made for older systems to be enjoyed with minimal fuss via emulation.

If you like this then take a look at our Retro gaming with Raspberry Pi book. It’s packed with retro gaming projects and tutorials.

Since RetroPie does not yet work on a Raspberry Pi 4, Zach had to use the 3B+ model instead. Planning proved to be the trickiest part of the setup, but he knew he needed a display that could run on either 12 V or 5 V, and a single power supply that would output enough amperage to run the screen and Raspberry Pi simultaneously for hours.

“From there, it was a matter of finding a sturdy case that had a removable panel for the Arcade Edition and a foam insert for the Console Edition,” he says. A Nanuk 910 waterproof hard case worked well, requiring only a little bit of shaving to the inside with a box cutter so that the screen would fit nicely in the lid, while allowing room for the wires. “I found some slim 90 degree cables normally used on drones, because there wasn’t the space for normal micro USB and HDMI cables,” he says.

For the Arcade Edition, Zach had to essentially build a USB controller. “I made use of illuminated buttons and a joystick connected to a small PCB that turned the setup into a USB device,” he explains. He took inspiration from Pimoroni’s Picade cabinet. “The controls use the same layout because I figured they’d worked things out already.”

Even so, Zach encountered a problem that almost killed the project before it started: how to add a joystick within a closable case. “I messed around with a few hinging mechanisms and then found a company that makes a removable joystick,” he says of the fortunate solution. As for the Console Edition, that has been a case of cutting the foam to house controllers, chargers, wires, and other gaming peripherals that can connect to the Raspberry Pi, but the fun isn’t stopping there. Zach believes AdventurePi will eventually be developed as a much smaller version using a custom power supply. “I’d also like to add a power button that automatically shuts [Raspberry] Pi down when the case is closed,” he says.