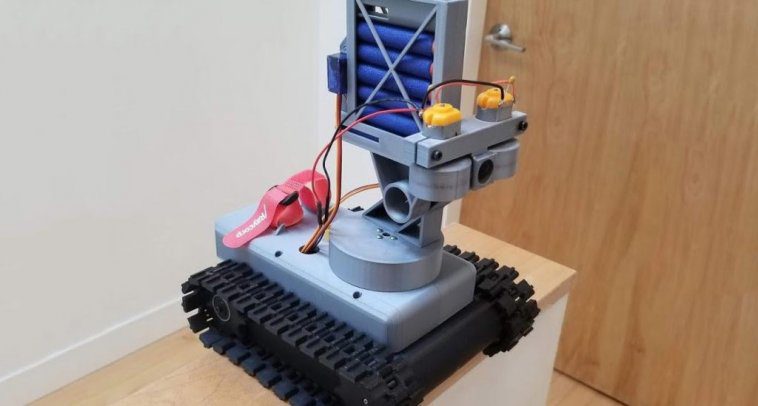 This miniature roving robot, known as M.A.T. (Modular Arduino Tank), is beautifully built. Not only is it remarkably accurate, but the dart launching mechanism is a triumph of non-lethal weapon design.

Unlike the majority of Nerf mods out there, this tank doesn’t actually use any parts from a toy gun. Attached to the front of the dart turret is a pair of flywheel motors. These spin the flywheels in opposite directions, at a pretty fast rate. An arm mounted on a servo feeds a dart into the flywheels, which propel it at an impressive lick!

The next dart is gravity fed, and simply falls into place, making it quite a rapid firing micro tank.

Li takes his tank through a series of batteries, all of which show impressive results. Accuracy is spot on, which isn’t easy with notoriously unreliable Nerf darts. A five-foot muzzle velocity test achieves a whopping 35MPH dart speed. The distance test sends foam projectiles an impressive 44 feet.

Then there’s a demonstration of some excellent grouping in the accuracy test.

It’s sparked up a whole conversation over on Reddit about how the firing mechanism can be modified. The flywheel thrower operates much like baseball launchers (and this dog toy, for example), which has really captured the maker community’s imagination. Shooting dried peas seems to be a popular idea. As does the idea of building in object detection for pest control.

The maker has shared his Arduino code on GitHub. You can also find the 3D print files and a build guide on Li’s website.