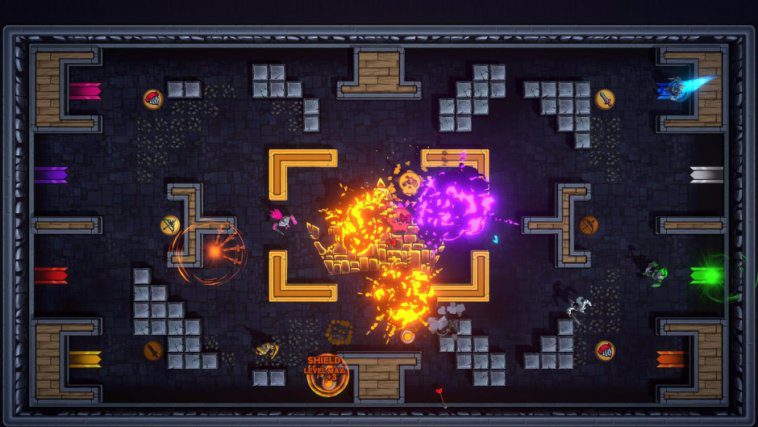 I’m so excited to write to you all today to announce that Knight Squad 2 is now officially available for Xbox One. We hope fans of the original Knight Squad and new fans around the world will enjoy the cranked-up chaos of our 8-player arcade medieval party game with their friends and family.

To us, one of the greatest additions we’ve introduced  in the sequel is giving you the ability to customize matches with unique gameplay modifiers and a complete item switch menu. This means you’ll get to pick and choose items which power-ups you want to appear on the field as well as the ones your knights will spawn with.

Combining these new customization features with all the 13 game modes Knight Squad 2 has to offer makes for countless possibilities and we want to share a few of our favorites with you!.

The objective in Gladiator mode is to control the central golden area longer than your opponents. When the bodies of fallen knights explode, it becomes pretty hard to find a safe spot in that zone. This game type puts positioning and blocking abilities to the test.

Battle royale is all about surviving and Knight Squad’s one-hit kill mechanic makes a large part of fighting about reactivity. The shield power-up allows you to take an extra hit and adds an additional layer of strategy to combat.

In this blood sport,two teams of knights try to launch a ball into enemy goal while riding speedy unicorns in a slippery arena.  Hilarity is guaranteed. As a bonus, this mode unlocks a secret (and very intense) soundtrack!

If you want to relive the good old Knight Squad 1 days, you can effectively turn off anything new we’ve added in the sequel. You can disable the ability to block attacks and remove the Bazooka, Proximity Mines, Magic Mirror, Book of Fire, and Ice Aura from the item list.

In painter mode, the goal is to coat as much ground as possible in your color. When every knight starts with the weapon that makes you dash in a straight line, the turf war gets really hectic. And if that wasn’t enough to sell you on this mode already, you’ll also get to hear the pleasant sounds of eagles screeching all match long.

In Crystal Rush, teams need to get their hands on a drill and destroy the enemy’s crystals. These matches also unfold at a much more rapid pace, as every knight starts out equipped with a max level drill that turns crystals to dust in the blink of an eye.

The kamikaze power-up gives you an amazing boost of speed and invulnerability… until you explode 2 seconds later. Imagine that being the only power-up spawning in the map. It’s particularly a great fit with Domination, a game mode where you need to cover a lot of ground.

You may have heard of a certain popular Karting Game. You might say we’re fans. Enjoy our spin on the formula in Knight Squad 2 with proximity mines (banana peels) and rockets (shells). You can even add a horse starter power-up to giddy-up to 100cc.

And these are only 8 options, we’ve tried and tested dozens more. Knight Squad 2 is a party game made to be accessible for everyone, so we hope you’ll get to gather a few friends to have a good time (and a good laugh) over some intense multiplayer action.

Knight Squad 2 supports local, online, and couch vs. couch multiplayer options, so please join our community Discord and get knighting!

From all of us at Chainsawesome Games, have a great day!

☆☆☆☆☆ 6
★★★★★
$14.99
Get it now
Xbox One X Enhanced
Knight Squad 2 is a chaotic arcade multiplayer game for up to 8 players. Pick an eccentric knight and fight for glory with wacky weaponry. Triumph over your friends in a ridiculous amount of game modes, both locally and online. PREPARE TO ENJOY … Local and online cross-platform multiplayer – Gather friends and/or challenge complete strangers no matter what platforms they choose to play on. A ridiculous amount of game modes – Brawl in a battle royale, capture the Grail, push the payload, hunt for souls, become the Minion Master and much much more. Wacky weaponry – Arm your knight with weapons from the Middle Ages such as the noble bow, the exotic boomerang or the sneaky proximity mines. Customizable gameplay – Turn up the chaos by enabling the slippery floor, the exploding corpses or changing the starter weapons and upgrades.