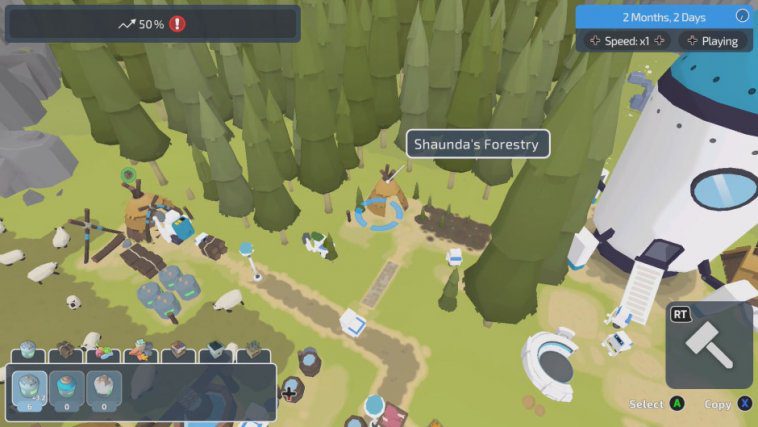 The Colonists is a relaxing city-building game that combines charming robots and automated production. Get ready to harvest resources and set up manufacturing lines by constructing road, boat, and train transport systems. Most important of all? Increase the complexity and make sure there are no dips in productivity.

But it’s not all hard labor as you can also set sail and discover new lands. Be careful, though, as you may encounter rival bots and fight for survival. Battles not your thing? No worries, The Colonists has peaceful and military campaign modes, challenging trophies, and a sandbox mode. The bots have really cute hats, too.

Deforest, and Then Reforest

The spaceship that drops you off gives you a few logs and energy to get you started. However, you’ll need a lot more wood as the starting buildings all require it to be constructed. That means you’ll need lots of trees!

Build a Lumberjack Hut so LumberBot can start gathering logs from the nearby trees. But you can’t just take. Make sure you build a Forestry so TreeBot can plant new trees and regrow the forest. Look after nature and nature will look after you.

Roads Are the Path to Happiness

When building your settlement, you’ll need to place roads and paths for your CarryBots. They use these to transport resources all over the colony. Be mindful of your placement, thought, as they can get blocked up with goods. CarryBots really don’t like that.

The key to placing roads is to make full use of the space you have. Think ahead and be wary of where you construct buildings to figure out the best routes. If it doesn’t go well, you can always bulldoze them and rebuild.

The bots and buildings in The Colonists are powered by energy. Energy comes in three levels and each one is used to power different parts of your settlement. You’ll begin with level 1 energy but first you’ll need to construct level 1 residences so your bots can generate that energy.

Eventually you can research your way up to level 3 residences. This is where you’ll get the level 3 energy needed to power more complex bots and buildings. Just make sure you have enough power and you’ll keep progressing.

The bots in The Colonists might be made of metal but they still need food and water! You think they make energy out of nothing? Build a Sheep Farm, a Vegetable Farm, or even a Fishing Hut so they can grow and gather food.

This basic food will help you make level 1 energy. If you want more advanced energy, you’ll need more advanced food, such as bread from BakerBot and tea from TeaBot. You’ll also need to build a well to keep the bots hydrated so they can keep producing energy.

Stone is a must-have if you want to level up your settlement beyond basic wooden structures. Every map in The Colonists has a source of stone. If you can’t find it, you’ll need to look further afield. It’s worth locating the stone early on.

Once you’ve found it, you’ll be able to build a Surface Mine next to it and start mining. You’ll be able to use that stone to create better buildings and further the colony’s research beyond what you could before.

Been There, Saw That

Once you’ve got stone out of the way you might want to turn your attention towards making a Sawmill. They are used to make planks out of that wood you don’t need any longer.

Wow, planks, we’re really advancing now. Alright, planks don’t seem that revelatory at first but they go towards making the settlement flourish as they contribute greatly to construction and research.

As Far as the Robotic Eye Can see

Once everything’s running smoothly, you’ll want to expand, expand, expand! Bored of fishing in lakes? Build a road to the sea and net more fish. And there are always more forests to chop down if you can’t regrow them fast enough.

If your colony is getting too busy, then going further afield also gives you more space to build. Expand by building watchtowers. Maybe you’ll encounter other robot settlements who have landed nearby. Attack!

With these tips in mind you’re ready to kickstart your own colony of cute little robots doing cute little jobs. Speaking of which, you can make them even more adorable by changing the color of your bots and buildings. Don’t forget you can also customize the game to match the pace you’re after. Switch to peaceful missions only, or if you’re feeling aggressive then embark on military missions? Play it your way and build the ultimate bot settlement. 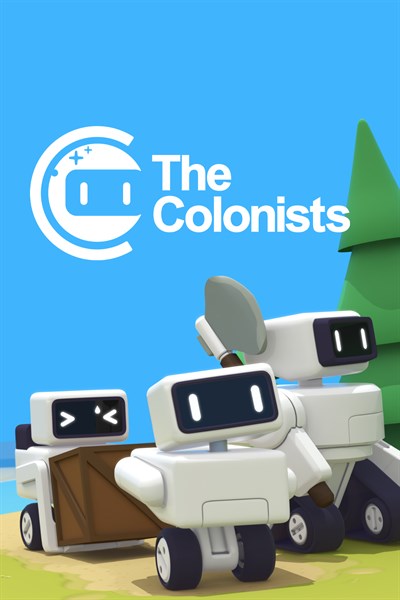 ☆☆☆☆☆ 6
★★★★★
$23.99
Get it now
The Colonists is a relaxing city building game inspired by classics like Anno and The Settlers. Help these cute robots build their dream settlement. Each bot has a job to fulfil, from harvesting crops and fishing at the lake, to transporting resources and discovering distant lands. You'll advance through three different Ages as you build infrastructure for your colony by constructing road, boat and train transport systems. Help them work together to achieve automated harmony.

Related:
Join Left 4 Dead’s Bill Overbeck in Tome VII of the Dead by Daylight Archives
Boris the Rocket is Now Available on Xbox One
Five Reasons Why Angels with Scaly Wings Could be Your New Favorite Narrative Adventure